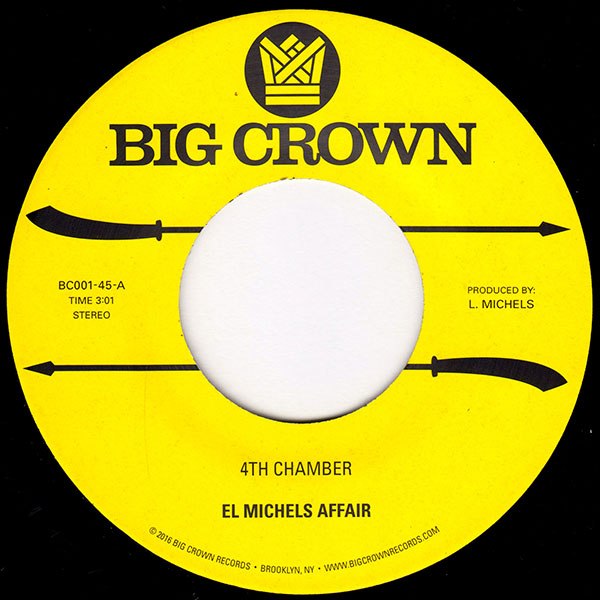 Back in 2009, El Michels Affair rocked the world with their killer Wu Tang rendition of 37th Chamber and totally changed showed how recreating classics were supposed to be done. The sound was just as grimy and official as if it was recorded in the original 36th Chambers studio before the flood and the destruction of Shaolin. Well it’s been a long wait but El Michels Affair is back and following things up with their latest cover and a GZA favorite from the Liquid Swords LP, 4th Chamber on the newly launched Big Crown Records. As Iz The Wiz would excitingly say in the documentary Style Wars when getting the first glimpse of the recently painted whole car, this is it, this is it!! And that’s exactly how we felt when we first heard it. Hearing this version not only does this original justice but also makes it new and refreshing adding a heavy metal influence and one that we would hope to see GZA perform live at some point.

The B side is something of a Big Crown family affair, El Michels inviting the one and only Lee Fields to the track to sing the vocal part over from Ol Dirty Bastard’s rawer than raw album cut Snakes. The tune starts with a sweet stripped down vocal performance from Lee then quickly turns dark and tests the durability of your speakers. EMA taking a small bit of the sample track and turning it into a thing of it’s own, once again the tried and true pairing of producer and singer bring us yet another timeless classic. Seven years later it is safe to say, El Michels Affair is sharper than ever.

Big Crown Records is well underway to becoming that sure shot label so we highly suggest you grabbing copies before they’re gone!