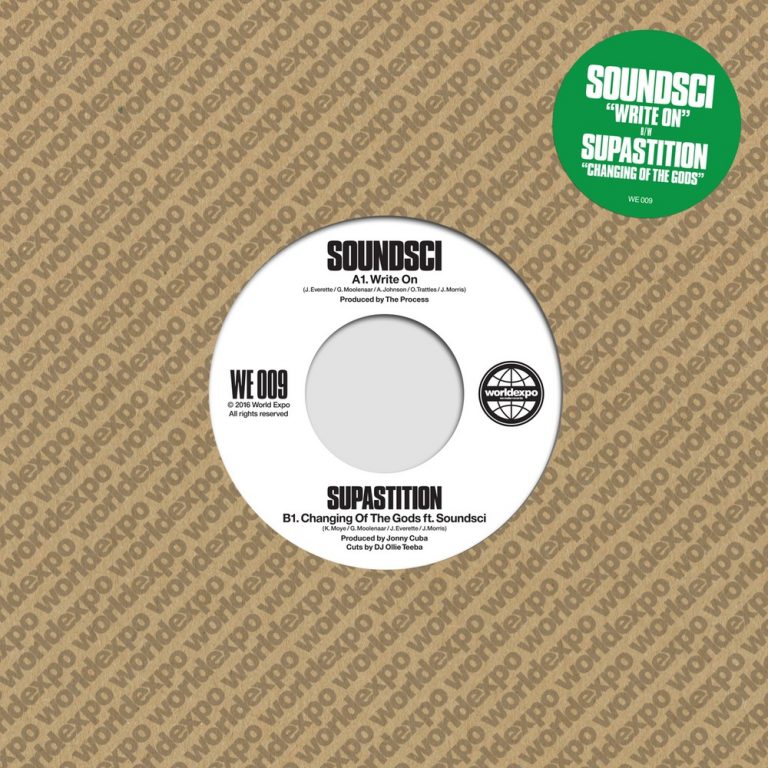 Soundsci “Write On” b/w “Changing of The Gods”

They say that there’s something for everyone, yet we so often hear people say that there’s nothing good out there. We’ve never believed in or subscribed to that notion because we’re ones who believe in the term “dig deeper”. Has the sound of Hip Hop become stale over the years? As a whole, of course it has but there has always been those nuggets waiting to be dug up until the time was right for a plethora of quality releases to hit the airwaves. Although the time has not yet reached that point, that movement is without a shadow of a doubt being ushered in by a few chosen few, and in this case, it’s a collective known as Soundsci.

The name Soundsci should be a familiar one especially if you’ve been keeping up on our reviews here at Nostalgia King and we’ve got another fresh 7” for your listening pleasure from the crew. A double sider kicking off with “Write On” featuring the trio of Oxygen, UGeorge and Audessey rejoicing in the expression “struggle builds character when you weather the storm, so write on”. Coming in on the flip side, “Changing of The Gods” (originally released on The Gold Standard LP in 2015) from the newest member, Supastition who as usual comes correct with the verbal goods slung over top of a cinematic theme a’la Streets of San Francisco.

It’s quite obvious that these guys are in it for the long haul and stay consistent with each release. Packed with fortified dopeness for the eardrums, Soundsci comes correct.