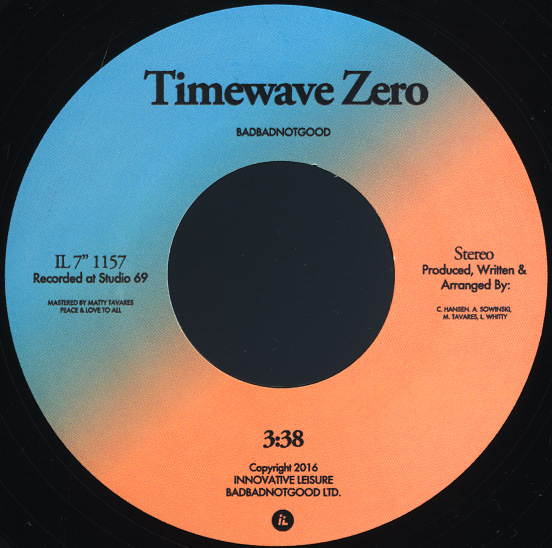 We recently stumbled across a new 45 from one of our favorite Canadian groups who consistently lays down heavy production across the board and works with quite a few acts to bring a unique sound to their catalog including the Iron Man himself, Ghostface Killah. Consisting of members Leland Whitty, Alexander Sowinski, Chester Hansen and Matthew A. Tavares, the band goes by the name of BadBadNotGood and their recently released 7” “Timewave Zero” is a cinematic masterpiece. Sliding through under our radar but not undetected, this limited edition release features two sides of exclusive tracks not found on their latest IV LP. Very cinematic in a 60’s sci-fi film kind of way with tight grooves, shuffling drums and spacey keyboards that would fit perfectly in any film covering the topic of space exploration during that time. The flipside, “Here & Now” delivers even more cinematic punch but this time with a jazzy approach, organ touches and heavy flute compositions unlike anything else that we’re hearing from other artists of today.

Not sure how we almost missed this 45 but it made us go back and listen to their IV LP which definitely set the tone for us today in the office. Check the video below which actually isn’t an official video by the label but a fan made which connects the music and the visuals perfectly.