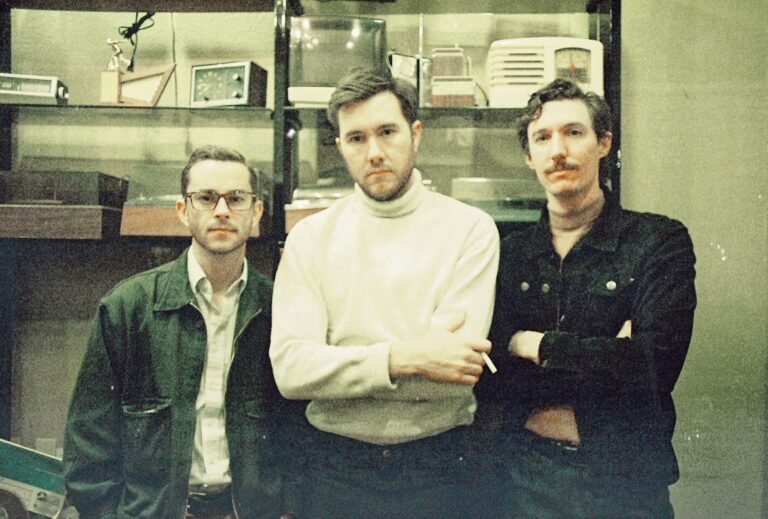 Earlier this year, cinematic soundtrack lovers were treated to some special that the world never knew existed but finally had been rediscovered to everyones amazement which caused a frenzy of digging to find out the who, what and why. That discovery was a master reel recording and soundtrack to a long lost Italian Western noir film directed by Stefano Paradisi. The film itself never saw a theatrical release due to it being lost in a fire but the soundtrack recorded by Whatitdo Archive Group gives us some sonic insight into what “The Black Stone Affair” would’ve been had we experienced it on the big screen.

The soundtrack has already begun to pique a lot of interests in the film world so don’t be surprised if you eventually see a Quentin Tarantino rendition or pulp novel suddenly being made. It’s discoveries like this that make filmmakers and historians dig deeper into genres and create cinematic magic for the world to enjoy.

I recently caught up with Whatitdo Archive Group to find how the discovery was made, how it all came about and what does the future hold for them.

Skeme: Let’s start at the beginning of your journey as a group. How did you guys meet and what was the common thread between you that made you say, “hey, let’s create music together”?

Alex: Mark and I met early in grade school at summer camp. We became better friends in high school and that is when we started recording music together. We put out our first album right before we graduated. I met Aaron in college when we both were taking a jazz combo class. We got paired together and I really loved the way he played and I knew that I wanted to keep making music with him outside of the classroom. Mark, Aaron and I all started working together collectively during college and recorded a lot of music with just the three of us and also separately on our own projects too. What’s magical is that we all get along really well together and have a lot of shared interests in recording, music genres and playing styles so it really made sense to take this group seriously.

Skeme: With this amazing cinematic discovery known as “The Black Stone Affair” which unfortunately never received a theatrical release due to the original film reels being lost in a fire which in itself makes for a great story. How did you first come to know of this film and the director Stefano Paradisi?

Alex: Great question! One of the best parts about Whatitdo Archive Group is that we’ve been able to fuse our love affair with musicology, art history and being serious about researching all together. After, of course, falling in love with Italian cinema and soundtrack many years ago we naturally started reaching deep into the abyss for anything we could get our hands on in regards to old film scores, composers and directors. Naturally, this took us down a very interesting rabbit hole where we realized that there had been a film by a no-name director, Stefano Paradisi, that had never been released. The more we looked into it the more we were able to put the pieces together and find out who was involved with that film and then began talking to people who knew people who worked on this movie and soundtrack and we ended up stumbling upon a gold mine of Italian cinematic history. Not a lot had been written but over the course of about a year and a half we had basically put the puzzle pieces together to understand who Stefano Paradisi was and what he was about to do for Italian cinema.

Skeme: What were some of the early processes and research that went into creating the soundtrack for a film that you had never seen in order to keep it authentic sound and true to what would’ve been had it been released earlier?

Alex: After getting first hand accounts of what the movie was supposed to be, who is in it and some very interesting anecdotes (all with the help of our friends at Record Kicks in Milan who translated for us) we were able to get a fully realized account of what this movie was and how all the scenes that were filmed we’re going to look, what the vibe was, what the dialogue was, at least from what people could remember and the arc of the storyline itself. With all of this really invaluable information we got, we also spent an incredible amount of time simply watching European cinema, specifically spaghetti westerns from that time. And listening! We spent so much time listening very carefully to the production, timbre, instrumentation, melodic and harmonic motifs that occurred in all of these films and took dubious notes understanding what makes these movie soundtracks sound the way that they do. So after compiling thousands of hours of music we basically began composing what would be “The Black Stone Affair” Original Soundtrack.

Skeme: Was there any hesitation early on in taking on the task of creating the soundtrack? Was it something that you knew you had to do justice with or was there any second guessing like, “we’ve got one shot and can’t mess this up?”

Alex: I wouldn’t say there was any hesitation at all when we decided to make this happen. We all sort of looked at each other and said this sounds like an amazing and fun journey to go down. What better way to spend one’s time than by creating music with your best friends? I think that with all that we’ve done in our music careers, we definitely felt very capable with pulling this thing off, we just knew we had to be perfectionists, no stone unturned, a keen eye on even the most subtle details was crucial.

Skeme: It’s obvious that you spent a lot of time researching the sounds of the greats like Alessandroni, Umiliani, Piccioni and the late great Morricone for this project but did these legends play an influential role in your love of music and being musicians prior to the project?

Alex: I’d say that we’ve all been deeply in love with Italian Soundtrack and Library music for quite a long time. It was actually our drummer, Aaron Chiazza who turned us onto the first piece of music from this genre. It was Sandro Brugnolini’s “Utopia” album from 1972. After he showed that record to us, it was all over and we immediately fell in love with the genre and thus began a years long love affair with Italian music from that time. From there, we quickly discovered all of those other greats like Bruno Nicolai, Alessandro Alessandroni, Pierro Piccioini, Umiliani and of course Ennio we had known for a while before that but finally we really dug deep in to his work which is arguably the most exquisite of all.

Skeme: One of my favorite tracks on the album is “The Black Stone Affair (Reprise)” which honestly to me feels very much like something that could have been from a Blaxploitation soundtrack. Were there any other outside influences besides the list of Italian composers that were obviously fueled by?

Alex: Yes of course! Marvin Gaye played a bit of a role in a few moments. The album “Trouble Man” was a good influence for us and you can feel a little bit of that in “The Black Stone Affair (Reprise)” but also in “Blood Chief”. The (Reprise) actually started as me exploring some Dorothy Ashby grooves that I really liked and then added a bit of that late-Alessandroni influence with the rising key center, but overall it definitely has more of a Blaxploitation vibe reminiscent of Marvin and Hayes. This ended up working out well because these older Italian composers were most definitely listening to American music and they themselves infused these flavors into their work.

Skeme: Let’s dive into the recording process because sound and the equipment used is something that’s very important in my opinion. How was this project recorded, what equipment was used and was it an analog set up or was this something utilizing digital means and plug-ins?

Alex: This album was a bit of Frankenstein. A good portion was indeed recorded digitally. Between the three of us I think we have about 10 different tape machines and we used a few different ones for various parts of the album. “La Pietra” for example was recorded exclusively on a Tascam 388 and “Farewell Lola” was done on a Teac ¼” 4-track. I think we would’ve preferred to have this done 100% on tape but what we were able to do was use a ton of vintage gear; analog preamp‘s, old microphones, the whole shebang. And I think that was a huge factor in why this record sounds the way it does.

Skeme: You worked with 24 musicians to complete this project, which seems like it could be very overwhelming. Was that the most number of hired musicians outside of your collective that you’ve worked with and how did you go about choosing each individual?

Alex: We chose the musicians based on what the songs needed. One of the songs called “Ethiopian Airlines” was recorded back in 2016 with a wonderful horn section that you might recognize on most of the new Penrose label recordings. As the record progressed in production, we used other various horn players in the area that were available. Every single person on the album we’ve known personally. Reno has a very dense community of musicians that are all exceptionally good.  Because the majority of this record was made during Covid, I could only have one or two musicians at a time in my studio. This made it not so overwhelming, but just the scheduling and blocking out of time was the only thing that posed as a small challenge. Doing it this way actually allowed me to get the exact take that I wanted out of every single auxiliary musician. Alessandroni‘s whistle was famously recorded down in LA at a friend’s studio, so I never got to meet him in person but we did speak over the phone a few times and he was very excited to be a part of this project that in a way directly honored his father.

Skeme: How many songs were recorded before coming up with the 11 that are featured on the album and are there any more recordings that didn’t make the cut that we’ll possibly get a chance to hear like alternate takes or such?

Alex: Every single song that was written for this was used on the record. I actually had to write the extra song for the bonus 45 that got pressed. That one ended up being one of my favorites and has been spun at some rad DJ performances. The only thing left over from this record is actually all of the demos that we had made. No hidden tracks over here!

Skeme: Now that the album is out and has generated an amazing buzz and following and you’ve connected it with beautiful visuals, is the response everything that you’ve hoped for?

Alex: Oh, absolutely! We made this record not knowing what was going to happen with it at all. The fact that Record Kicks teamed up with us was a true blessing. They were 100% supportive and went above and beyond with telling our story and getting this music out there in front of everybody. We couldn’t have asked for a better team to be on our side.

Skeme: What’s next? Are there any more projects of this sort or other things in the works for the near future?

Alex: As of right now, we are departing the world of Italian cinematic scores and moving into some more exotic territory. Don’t ever expect the same record twice from the Whatitdo Archive Group.