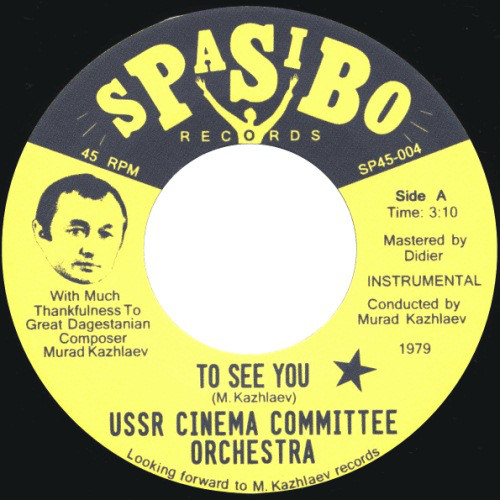 Murad Kazhlaev – To See You

To most collectors and diggers, Russian music, artists and records still seem very foreign and a hard market to break into when on the hunt. There’s so much to sift through to find what sounds fitting and without a grasp or knowledge of names of musicians, that task could be a never-ending hunt, even for those from the country themselves. One label that has been connecting the dots is Spasibo Records which began in 2015 curating the Russian sound of old and new and has since released it’s 4th and 5th servings of Russian delights.

On this double-sided release from conducted by Murad Kazhlaev and record under the artist name USSR Cinema Committee Orchestra, the A-side “To See You” was recorded in the late 70s for a movie but was never released on vinyl. Many Soviet groove diggers know of a 1980’s release but never as an instrumental, which is what is featured here on 7”.

On the flip side once again conducted by Murad Kazhlaev, “In An Hour” was written in 1966 as “Rush Hour” but then in 1971 was renamed by the author and recorded the same year by Czechoslovak Radio Jazz Orchestra. Unearthing these once unknown gems is what “digging” is all about and Spasibo Records is doing a great job with opening up new treasures for those who love to dig deeper.