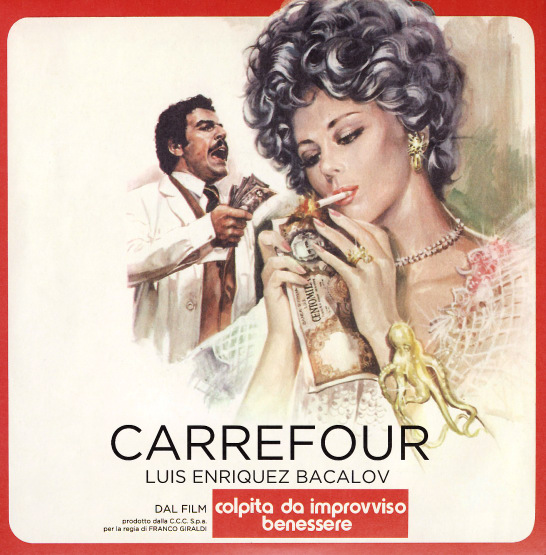 When it comes to relatively under the radar gems by most, Italian soundtracks sit on the top of the list for some, while totally foreign to others but without a doubt, some of these soundtracks obtain the most amazing music ever composed and quite frankly, Italians do it better.  Four Flies Records, a label known for reissuing some of the most sought after pieces found in serious collectors crates and making them available for those not able to drop 3 figures on an original pressing.  One of there most recent releases on the label and a beautiful 7″ from Luis Enriquez Bacalov is a funky double sider and some of his finest work.

“The Italian funk god Luis Enriquez Bacalov is celebrated here with this unmissable 7-inch record, featuring two of his grooviest tracks ever: on the A-side, the legendary CARREFOUR is maybe his funkiest soundtrack piece, here released for the first time in its entirety, with an unexpected introduction via a powerful horn section, which was cut from the original 1976 RCA 7’’. Behold an eternal jazz-funk masterpiece with solid drum breaks and hip hop heavy beats, funky congas, wah wah guitar, psychedelic organ. This track was used for the 1976 movie “Colpita da improvviso benessere”, directed by Franco Giraldi, but was originally conceived for the 1974 movie “Sistemo l’America e torno” by Nanni Loy. For the B-side, we have chosen from this same score another killer groovy track which was already compiled on our ESTERNO NOTTE Vol. 1 compilation. SISTEMO L’AMERICA E TORNO – SEQ. 7 has a tremendous rhythm section, a wonderful guitar riff, psychedelic flute, and stunning Hammond organ solos. This is another future classic from the golden age of Italian soundtracks, and an absolute must-have for any and all jazz-funk DJs worldwide!”