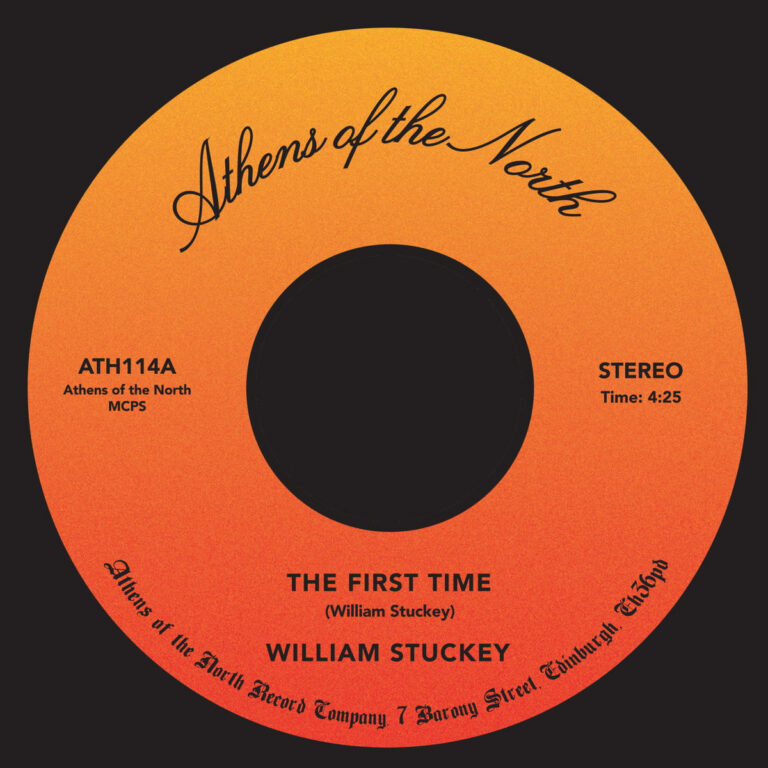 Athens Of The North hits another homerun with their latest single, a classic and first time on a much welcomed 45 pressing with a previously unreleased instrumental on the flip. The single in mention is the beautiful tune “The First Time” by William Stuckey  (who recently passed away) and one that seems to fly under the radar of most peoples knowing.  There’s always a story connected to the music and during the release of this AOTN single there was a connection made between Brian Sears and William Stuckey which adds more context to what makes this release even more special.

“I’m not one that likes to write but I wanted to say a few things about William Stuckey. William Stuckey passed away last in August 2021 at age 73, and is an artist that I’ve been working with since last summer. He was a key fixture in the Little Rock music scene and most notably was one of the driving forces behind the legendary True Soul label. Lee Anthony, the owner of True Soul Records, once told me that William Stuckey was the most talented musician he had ever worked with, and if you know anything about that label or Lee Anthony, that’s quite a compliment.”

“When I reached out to William last summer about re-releasing his material, he ignored my calls and messages. Fortunately, I was able to reach his son, Erreyon who was kind enough to listen to me. I’ve worked a lot of terrible sales gigs in my past and “getting to the point” is sometimes a hard thing to achieve, especially when you’re trying to talk about the music business and music that’s 50 years old. But the point was simple, his music matters and deserved to be preserved. This resonated with William and Erreyon and they gave Euan Fryer and myself a chance.There was a memorable handoff of the master tapes in a parking lot and from that point forward I knew William Stuckey trusted me. Trust is something he had to do a lot in his life due to the fact that he was visually impaired and I’m thankful he trusted us. As I wrote before, there was a long process of transferring the tapes, but it was successful, and the album has never sounded so good. William had incredible hearing and was able to pick out details most might not detect. He was gifted and that shined through his own playing and voice through copious recordings. Speaking with him after he finally heard the newly remastered album, the way he had intended for it to sound, is something I’ll never forget. Moments like that are really the reason why I feel so compelled to work with older musicians that didn’t get a fair shake the first time.”

“Meeting William Stuckey face to face earlier this summer was one of the highlights of my year. We laughed and hung out at his place where he had lived for the past 50 years. I told him his music was internationally known and the re-release was well received. He was humble and felt like a long lost friend that I hadn’t seen in a long time. I’ll never forget that. I told him I wanted to take some photos, and I’m so glad I did.We had a good time and it was a beautiful summer night and as I left his place his neighbours noticed me walking to my car and wanted to chat, so we talked briefly and it ultimately lead to one of them getting into their car and cranking “The First Time” on the stereo system in their driveway. I wasn’t sure if Stuckey could hear it from his house, but part of me knew he probably could and hearing his song echo in the background as I drove off and thinking about Stuckey and the time we shared and his music being appreciated by so many, even in that moment, is a wonderful memory. I’d like to think he was smiling.His music and legacy will live on forever.
Rest in peace to a great one. ”