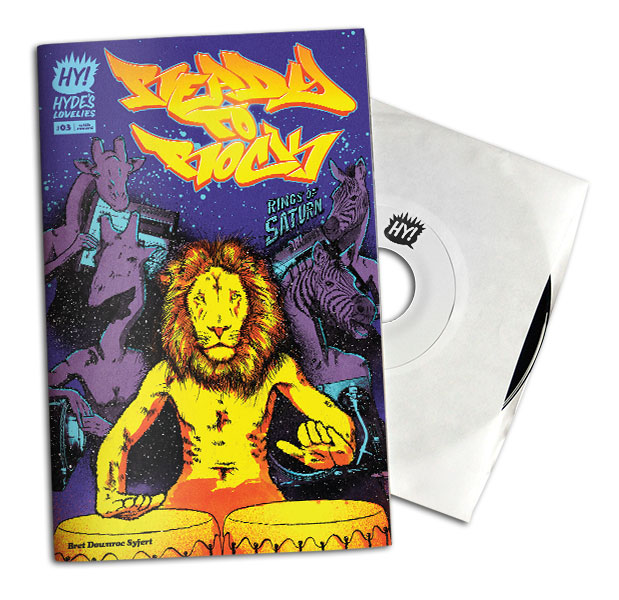 Ready To Rock “Rings Of Saturn”

Graffiti and comic books are two things that have always gone hand in hand. From early writers studying the artistic styles of Jack “The King” Kirby who influenced their characters and paintings on the subway cars of yesterday to large scale pieces still being created on canvas by those same artists and more in galleries today. Once that art connects with Hip Hop culture as a whole, you’ll find MC’s holding mic’s and standing proud as if being a superhero ready to save the day with lyrical skills and fantastic stage presence. So it’s definitely a no brainer that someone like Bret Syfert aka Downroc, an artists, Bboy and all around lover of the culture would create the Ready To Rock comic series and package it with a 7” produced by Aiden Leacy which features vocals by Soulville’s Fat Nice. This is the complete Hip Hop package

Currently celebrating issue #3 in the series, the storyline follows the Breyks who are giraffe people in the distant future who re-create hip hop culture after digging up the vinyl records of ancient man. Their utopian existence is threatened by the arrival of Phantom, an evil being born from an industrial past. Ready to Rock is the only Hip Hop comic book and 7″ record series on the planet and one that should be enjoyed by those young and old alike.