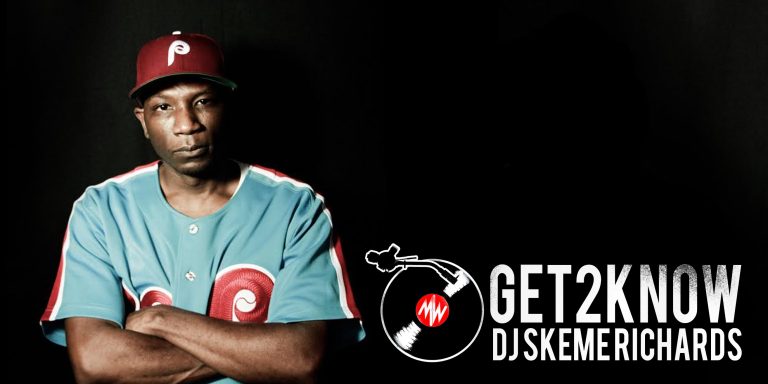 The legendary DJ Skeme Richards of Philly joins MyWayDj to give a quick breakdown. His career has inspired many DJs, so expect to see more in depth interviews and video clips with Skeme Richards.

What gear are you DJing with?

I’m still all about the basics, two Technics 1200 turntables, a mixer (Pioneer 900 preferably) and a combination of actual records and Serato (for certain genres).  Less is more in my opinion so I don’t need all of the bells, whistles and bright lights of equipment that distracts from actually doing the job you were hired to do and that’s rock a party.

What do you personally consider as your career highlight thus far?

I honestly don’t know if I even have a highlight yet. I’ve played around the globe and just when I say wow this is the most amazing thing ever, something else comes along that’s just as special.  There was a time when I really wanted to DJ in Japan, now I go once, sometimes twice a year and have been doing so since 2008.  I’ve played festivals in Dubai on stage at a marina with all of the yachts docked and everyone on their boats partying. I’ve played festivals with some of the biggest names in the DJ and Hip Hop world but then the following night I’ll play the intimate venue that holds 150 people and the energy will be just as, if not more of a heartfelt experience than the previous.

How do you balance your relationship with giving the listeners what they want and feeding them new music?

I’ve been fortunate enough to make a living being a “tastemaker” of sorts and have the luxury of picking and choosing what gigs I want to do.  I play tons of new music in my sets but it’s more in the realm of Funk, Soul, House, Disco and non-commercial Hip Hop that hasn’t hit the mainstream.  But it’s all music that I know the listener will enjoy because I’ve built a certain trust factor with them.  I won’t play music just based on the fact that it’s new, on the radio or because every other DJ is playing it because at the end of the day it has to be good. The DJ’s job is to break new music and I still get serviced tons of promo vinyl from labels before other DJ’s and before they hit the shops.  That’s what separated the great DJ’s from others in the late 70’s, 80’s and 90s because they were setting the trend and if you wanted to hear a certain song, you had to go to their party to hear it.  But in the rare occasion that I take on a gig where people have been conditioned by other DJ’s just feeding them the hits, I live by the motto “give the people a little of what the want and a lot of what they need”.

Read the full interview at MyWayDJ.com