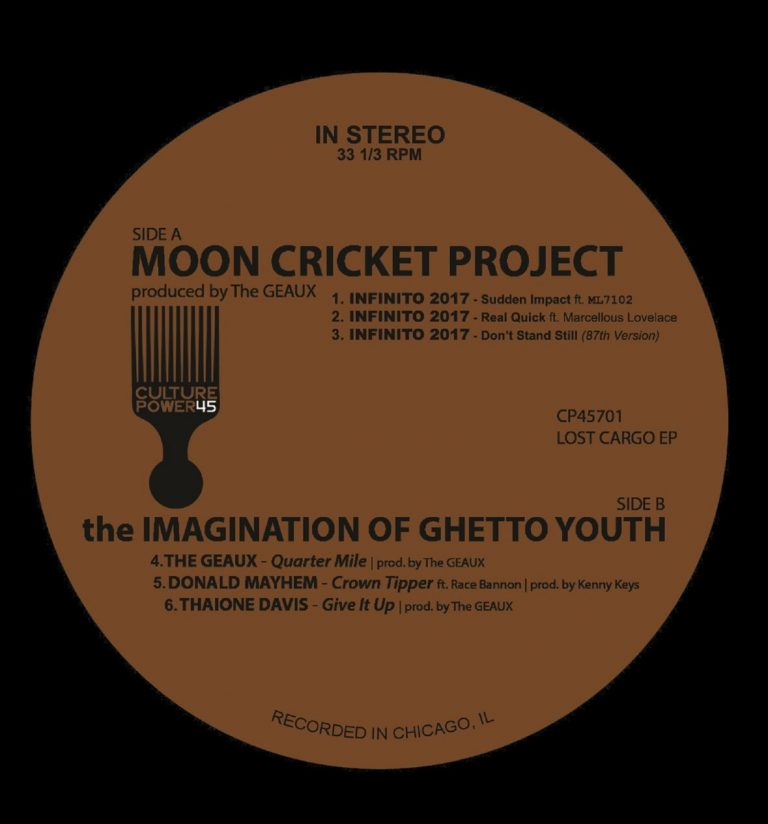 Culture Power45 is back like a vertebrae with another don’t sleep on it release and this time they go the EP route with a 6 cut slice of extra sharpness that melts through the speakers like provolone.

“Lost Cargo Vol. 1 is the moon cricket project spawned from a heated late night conversation on a train ride between Belgium and Amsterdam between Infinito 2017 and The Geaux, about the social complexities of music and demographics. It is said that the “moon cricket” in his dark-skinned silhouette appears in the night causing chaos with his loud and obnoxious overtones vibrating through the air. Sonic backdrops of analog and digital sound clash provided by The Geaux, while Infinito 2017 crushes all preconceived notions of the art of emceeing like a wild preacher on the podium in the middle of the apocalypse. This is THE MOON CRICKET PROJECT. Raw and true form sculpted from the basic elements of hip hop and culture. The moods are rugged, the rhymes are unapologetic, the beats are heavy. Recorded and mixed by The Imagination of Ghetto Youth.

Flip over the record and you are treated once again to the fader pushing collective known as The Imagination of Ghetto Youth (The Iggys). Production by The GEAUX and Kenny Keys with champion wordsmiths Thaione Davis and Race Bannon tagging along for the assist. The mayhem continues as the needle vibration is pushed to maximum head nod levels for the streets and the dusty clubs. Recorded under the skyline of Chicago’s south side, the grit is evident and embodies the emotion of black soul and tribulations. Hip hop with no fillers.”

Available for pre-order at https://culturepower45.bandcamp.com