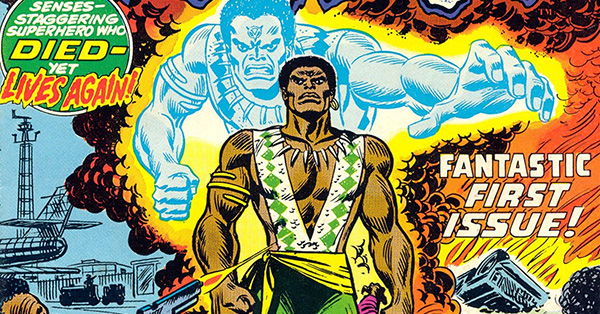 It’s seems like Black superheroes have become all the rage over the last year.  From the Netlix series featuring Marvel’s Luke Cage to the CW’s Black Lightning and now the highly successful box office hit, Black Panther.  One of our favorite Marvel Comics series featuring another, less mentioned black character is Brother Voodoo (Jericho Drumm) who starred in his his own series, in Strange Tales #169-#173 from Sept. 1973 – April 1974 and in a backup feature in the black-and-white horror-comics magazine Tales of the Zombie #6 (July 1974, in a story continuing from Strange Tales #173) and #10 (March 1975). He has gone to guest-star very sporadically in other Marvel series, throughout the years.

Returning to his native Haiti (born in Port-au-Prince) after 12 years (originally nearly 20 years of education and practice as an accredited psychologist in the United States, Jericho Drumm discovers that his twin brother, Daniel Drumm, the local houngan, is dying, a victim of a voodoo sorcerer who claims to be possessed by the spirit of the serpent-god Damballah. Just before he dies, Daniel makes his brother vow to visit Daniel’s mentor, Papa Jambo. Jericho does, and becomes Jambo’s student. After studying under the aged houngan for several weeks, Jericho gains a greater mastery of voodoo practices than his own brother, becoming a houngan in his own right. Papa Jambo then performs a rite that summons Daniel’s spirit from the dead and joins it with Jericho’s own. Having fashioned a worthy successor, Papa Jambo dies.

Taking the name “Brother Voodoo”, Jericho challenges the priest, who goes by the same name as his god Damballah, and his cult. With the help of his brother Daniel Drumm’s spirit possessing one of the cult members, Jericho removes Damballah’s artifact of power (wangal), causing Damballah’s snakes to turn on him and evidently destroying Damballah’s cult. Brother Voodoo becomes Haiti’s houngan supreme and champion, and establishes a sprawling mansion as a base of operations. He places the wangal in a safe, its combination known only to Brother Voodoo and his manservant Bambu.

Brother Voodoo encounters the scientist Baron Samedi and artificial zombies created by the terrorist-scientist group A.I.M.; the original Black Talon, Mama Limbo, and the Dark Lord Cult; and the houngan Dramabu. Having established himself, Brother Voodoo goes on to help other superheroes, including Spider-Man and Moon Knight, as well as the Jack Russell werewolf.

Brother Voodoo eventually succumbs to the lure of power that Damballah’s wangal represented. Upon Jericho’s wearing it, the god Damballah takes over Daniel’s soul, burns down the mansion and apparently slays Bambu.  He travels to New York City to attempt to take over the mind and body of Earth’s Sorcerer Supreme, Doctor Strange, who eventually frees Brother Voodoo of Damballah’s influence and re-confines the evil god to the wan gal.  He later becomes involved with the supernatural ‘Howling Commandos” operation of the espionage agency S.H.I.E.L.D., and registers with the government in accordance with the Superhuman Registration Act. 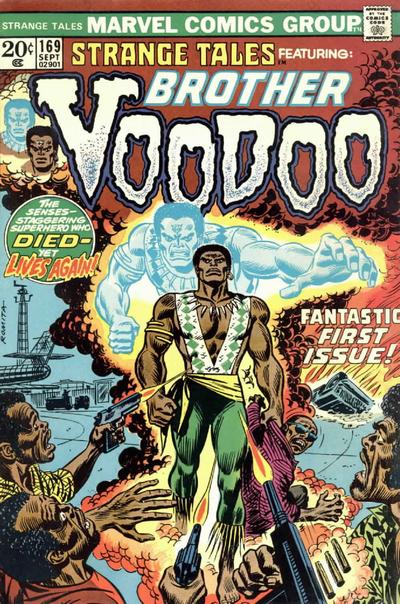 While Black Panther was fighting Erik Killmonger, Brother Voodoo revealed himself to be a Skrull when he attempted to kill Cannibal, whom he deemed to be a threat. However, the two killed each other in the struggle, and the discovery of ‘Brother Voodoo’s’ true form revealed the Skrull invasion to Black Panther, allowing him time to prepare. Like other heroes replaced by the Skrulls, Brother Voodoo was revealed to be alive at the end of Secret Invasion.