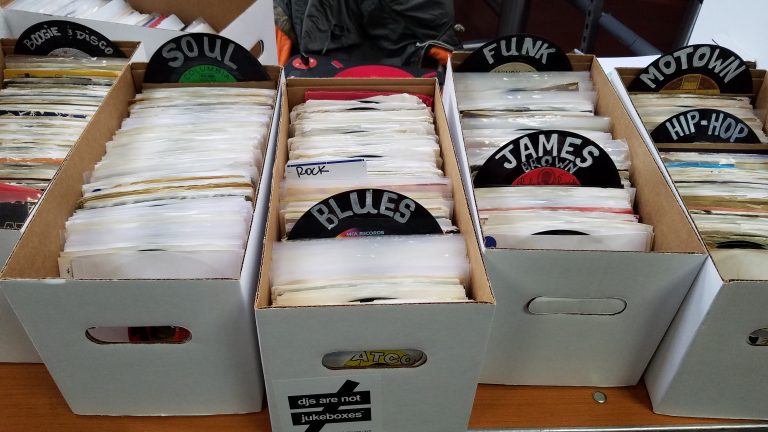 DJ Shadow “One thing that amused me at one point when we were in London that somebody was saying “oh yeah, nah they just pressed 45’s of stuff they didn’t have on 7”, especially the Hip Hop stuff (laughter)

Cut Chemist “Yeah, that would just defeat the purpose, wouldn’t it? Half the fun of these shows is seeing what people can actually dig up on 45 like ah man, they found that!?

Cut Chemist “2, 3, Break was good but when Romanowski played “Who’s Gonna Take The Weight by Gangstarr which was some Flexi in an Italian magazine.

Although 45’s have been a staple for Funk, Soul and Northern Soul DJ since the very beginning, it’s no doubt that both DJ Shadow and Cut Chemist masterpieces “Brain Freeze” and “Product Placement” are responsible for the widespread popularity of Hip Hop DJ’s wanting to play 45 sets early on with other Johnny come lately’s jumping on the bandwagon some 20 years late. Undoubtably the bible and blueprints for creating the greatest 45 show known to man, both should be in every collection for future reference and diggers of generations to come.

Many DJ’s love playing vinyl, but as traveling and working DJ’s taking on various types of gigs, sometimes you have to grab the laptop and external hard drive and do your job. 50% of the record game is digging to find great music to play for people with a small percentage of bragging rights amongst your peers when finding something that’s below the radar, presumed not to exist or just that oh shit moment when you come up with something that you’ve been on the hunt for, for years. Everything is available digitally but not everything is available on the conveniently sized 7″ format, but over the last 5 years we’ve seen an influx of DJ’s pressing records to play that don’t exist on 45 just for the sake playing it on that format. This isn’t about being a record purist but with all of the formats available, MP3, Wav, CDJ’s, the “hey look I’m playing 45’s of things that don’t exist” by known singers and rappers and getting props for it is pretty wack, no if’s and’s or butt’s about it. Why not just play a set using a digital source? And when those 45’s are the exact same records you’d play digitally anyway, it’s really pointless. Now if you’re pressing up your own productions, edits, etc., that’s the way to go, it’s something that only you have access to and makes your set more enjoyable but would mean you would actually have to work to entertain your crowd who wouldn’t know much of what you’re playing which is called “breaking records” a lost art and another issue within itself.

Quietly, we all recognize how wack the issue has become. Publicly we look on in disbelief without saying much because of that DJ’s fame and status without calling it exactly what it is, a flagrant foul with grounds for being ejected out of the game. This isn’t to challenge anyone in particular’s record collection, there are plenty of DJ’s with top notch crates who have indulge in pressing up something, but there are also those DJ who you’ve never seen play vinyl sets, obviously don’t dig yet playing vinyl sets of records just because of the trend. Props seem to come easier today than they ever have which isn’t surprising as we’ve seen it on the rise more with social media. Fluff has become the norm, quality has become rare and fame eclipses talent. One thing is for sure, digging never dies, records never lie.