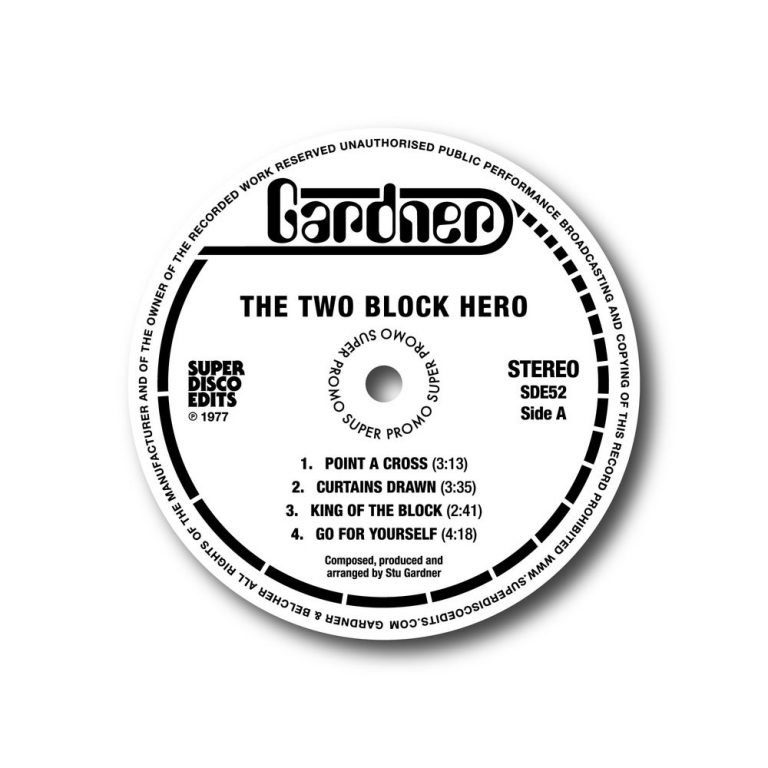 More previously unreleased quality goodness from the Super Disco Edits label and another courtesy of legendary composer and producers, Stu Gardner. This is the second unreleased soundtrack that was found on the Stu Gardner reels and it’s a funky one too!

“Back around 1977 Stu Gardner and his group “The First Cousin Ensemble” who recorded the wonderful LP “For the cos of jazz” were signed to powerhouse label Capital records. The group consisted of many members of Stu’s close musical network and often changed personnel. On the Two Block Hero soundtrack they had such heavyweights performing like James Gadson (Drums) , Rudolph Johnson (Saxophone) Ray Parker Jr. (Guitar) & Melvin ‘Wah Wah” Watson . Stu was approached by the big wigs at Capital to lay down a soundtrack for a new TV movie that was in production called “The Two Block Hero” a tale of growing up too fast , not learning life’s real lessons of family values and working hard to make a living. For some reason towards the end of the production the TV movie was scrapped and the subsequent music lay dormant on a reel at Stu’s house for all this time. The music represents the feeling towards the end of the 1970’s, creating lush layered production skills but keeping the raw energy of a film score.”

One can only hope that portions of the record TV series would get discovered and released like the soundtrack has. But in the meantime, we’ll just enjoy this opportunity to dive into a piece of history and add to our collections.