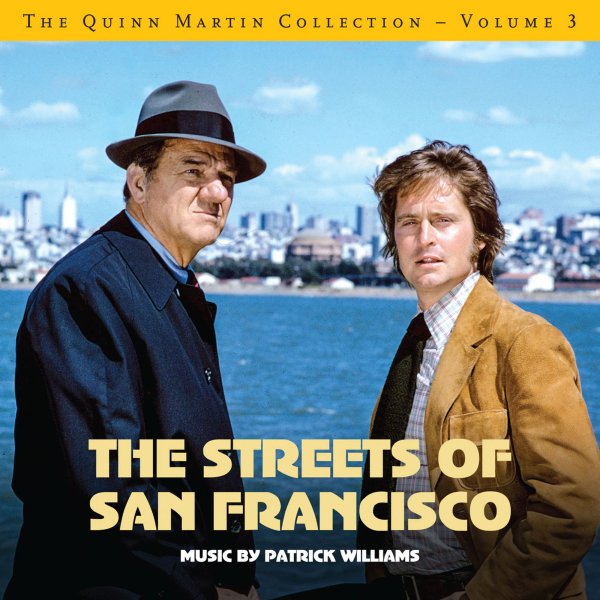 It’s not often that we review a CD release but this is one of those times where something so essential that we have to. File this under “Cop Show Funk” and what you’re getting is the score and cues to one of our favorite 1970s’s cop television shows ever, Streets of San Francisco.  When it came to TV cop shows and drama, if you ever saw A Quinn Martin Production in the credits, then you knew that it was going to be official. For the Streets of San Francisco, Quinn Martin used composer Patrick Williams to bring out the cinematic sound scapes that fit perfectly during that time.

“Fantastic funky soundtrack work from Patrick Williams – a cat who started out in jazz during the 60s, but who evolved to be come one of the hippest arrangers to score for the TV screen in the 70s! Williams gave the world so much great music during the decade, but some of our favorite may well be his work for Streets Of San Francisco – a show with a killer theme that really set the bar for the whole cop/crime generation, followed by the sorts of scoring that always made Williams so great – a mix of modes that evokes plenty of Lalo Schifrin modes, but also blended with the warmer touches that we love in things like Pat’s work for the Bob Newhart show. The 2CD set is overflowing with great work from a variety of episodes up through the fourth season – 72 tracks in all – and as an added bonus, the set also features 11 more tracks by Williams for the Robert Conrad show A Man Called Sloane – from the episode titled “The Seduction Squad”.

Contrary to popular belief about CDs not having appeal, there is still a big market for certain releases and genres, especially in the soundtrack department where many have never previously had physical releases. This is one of those times where if you’re heavy into soundtracks and especially 70’s cop shows, this is essential.