Prior to the internet, it was hard to gauge what a record collector had in their collections unless they were releasing some sort of cassette or CD mixtape to showcase their findings or they were being featured in a very rare magazine interview. But there has always been those that were known to have heat even if you never seen their collections, you just knew by their pedigree. Fast forward to the present and we’re living in the internet age, less of the big names are doing anything like they were in the past with showcasing their collections and more of the under the radar folks who have built quality collections are starting to come to light with Instagram being the driving factor. Over the last few years, I’ve connected with a few collectors that have caught my attention in how and what they collect which always keeps things interesting in the digging and keeps everyone on their toes.

I’ve been wanting to do a new interview series with folks that I have connected with on IG who dig a little deeper and have built great collections of not only records but other vintage items as well so why not make today the day to begin? Just a few short days ago I shot a message to Seattle’s @dustyfingers73 about chatting it up on the topic of cheap digs, flea markets, odd ball collectibles and of course records to which he replied that he was on board and down for the interview. What transpired was a peek into his wide array of records and vintage items that make up his impressive collection that fills his record room.

Skeme – First let me start by saying that I respect your digging and collecting game and how you go about finding gems. You’re still out in the field at fleas and swaps, lunch time digs and seem to be finding relatively cheap heat that others would spend money for. How long have you been digging / collecting and what is it about the hunt that keeps you going?

Dustyfingers73 – Thanks man, Im a big fan of what you’re out here doing as well. seeing what other collectors are up to is a constant source of inspiration and always gives me new things to hunt for. Like most folks that grew up in the 70s records for me just started as the dominant format not something I was going after in particular so the earliest stuff I remember being excited about were Spider Man Power Records and KISS albums on my trusty Fisher Price phonograph. I guess I started actively collecting records in the mid 80’s though, at that time I was 100% focused on hardcore/punk but thankfully my taste has expanded greatly over the years. I couldnt survive on a steady diet of hardcore alone at my age.

For me the hunt is the hobby in a lot of ways, especially now that any record can be sourced and purchased from the comfort of your couch and so much music is available digitally. I kind of feel like we all start out as music lovers but at some point the collecting becomes its own thing you know? There’s so many ways currently to hear the music if you want and just ordering a punch list of “grails” online isn’t nearly as much fun as going out and getting your hands dirty seeing what you can find.

Skeme – You’re definitely a multiples type of guys where I’ve seen that you will grab every copy of something that you see like your Curtis Mayfield collection, Slaughter’s Big Rip-Off, Fred Wesley & The JBs and others. What are your thoughts behind doing that and why are you slightly obsessed with grabbing multiple copies?

Dustyfingers73 – Oh geez, I don’t even know. It has to be some kind of mental disorder Im sure haha. In my defense I really only stockpile excessive amounts of a handful of artists (JB and related, Curtis, P-Funk) Lots of the other doubles I let go to new homes eventually. Often it will end up that I’m buying multiples because they’re different pressings/imports, promos or have inserts and the next thing you know… I just can’t leave heat in the cheap bins if I see it.

Skeme – Your taste in records is pretty much all over the place and you’ve built up a nice collection rom Jazz to Soul, Rock to Hip Hop, kiddie records and more. Is there a genre or artist that you gravitate toward more or just anything that catches your eyes and ears?

Dustyfingers73 – No I’m kind of all over the place really. Like I mentioned I started off as a 70s rock kid and then got really into punk and hardcore as a young teen. As I started losing interest in that hip hop really took over for me for a long time and that led directly into me buying and checking out lots of jazz, funk and soul due to what was being sampled in the golden era. Now I also grab psych, garage, prog, latin, soundtracks, electronic, kiddie records etc. etc. Whatever grabs my ears, I just like the good stuff but I usually check for funk, soul and jazz first when out digging. 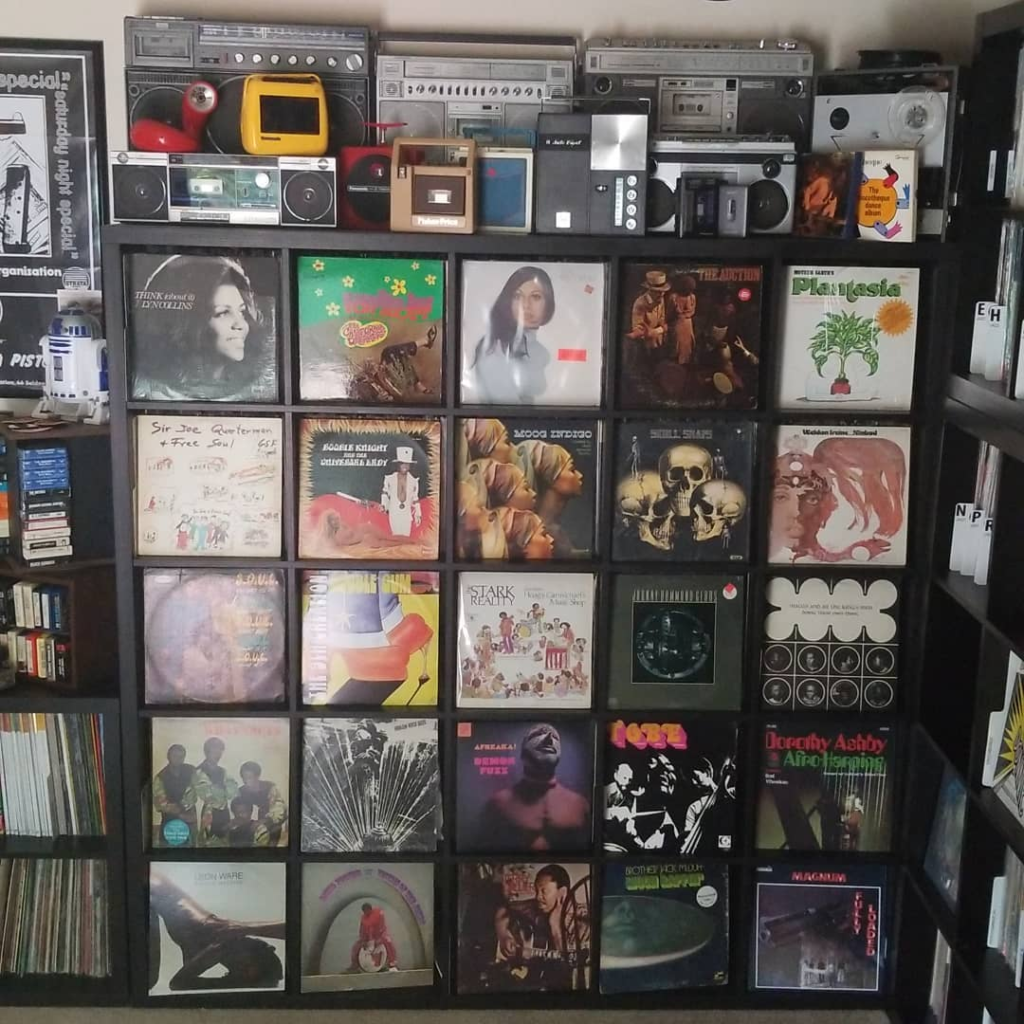 Skeme – I’ve always said digging doesn’t stop with just records, which is why I’ve always collected other things like vintage toys, comic books, art etc. that I’ve been into since childhood. Following you for a while, I’ve noticed that you collect a bunch of similar things as well that tie into the overall theme of what you’re into like pulp paperbacks, Shogun Warriors and even your OG Star Wars trilogy stuff. What is it about these things that pull collectors like yourself towards them to have in the stash? And what else do you obsessively collect?

Dustyfingers73 – Yeah for a long time I used to actively collect all sorts of stuff. Old video games, horror movie memorabilia, comics and magazines, 70s toys, VHS, pulp paperbacks you get the idea. At a certain point several years ago I decided that I was going to end up burying myself in all this stuff so I decided to really just focus on records and music related items since they brought me the most joy. Of course that hasn’t really stopped me when I’m out and see something cool. I tell myself I don’t really collect toys but my storage room says I’m a liar. I think the collecting gene hits most people in the same way though, everyone I know that I would consider a collector has several things that they seem to dabble in. For many of us I feel like it’s the drug of nostalgia that kicks it off, wanting to replace something from childhood or getting the things that you wanted and couldn’t get at the time and then it spirals from there. It’s definitely a particular mindset though to want to surround yourself with all this stuff, I’m sure there’s many psychologists that have explored this at length. I would say records are really the only thing I currently obsessively collect but I dabble in other things for sure. The last few years I’ve really been about portable 8 track players and record players.

Skeme – You seem to be a completist of sorts when it comes to certain things like your Power Records comic / 45 collection which combines two things that I really love. How long did it take you to finally complete the set and what other sets have you completed or see trying to complete?

Dustyfingers73 – Oh yeah I love those so much, they really hit me in the combo nostalgia sweet spot. Hard to say how long it took to complete the set really, I’ve been buying them as I see them since sometime in the 90s but I’ll tell you what prompted me to finish it was Covid. For the months that we were in full lockdown here where field digging was not an option at all I opted to finish off some artist sets where I was missing a title or two using Discogs and Ebay to keep myself entertained. Often these weren’t even expensive pieces I needed just randoms that I hadn’t picked up over the years for whatever reason. That set was a byproduct of that. I guess I’ve completed quite a few artist sets when I think about it but I’d like to finish my US James Brown LP set as basic of an answer as that is, I’m just missing a handful of titles and cover variants.

Skeme – With the rising prices of everything that’s been deemed “collectible”, is there a limit that you won’t spend beyond to have something or does the need to have eclipse that?

Dustyfingers73 – I love to dig on the cheap. Very rarely do I spend hundreds on a single record, it has to be something I really want and that I’ve been actively hunting for knowing the odds of finding a cheaper copy are slim to none. So no, generally the need to have a record doesn’t make me empty the bank account. I can usually wait it out for the right copy at the right price. I imagine it’s harder for younger collectors starting out now though, I can see why they might not want to wait for years to find a cheaper copy since they’re trying to build up a stash. It’s an expensive time to get into this hobby.

Skeme – Everyone’s grail is different and personal to them but is there a grail or grails in your collection that you would never sell or trade?

Dustyfingers73 – I’ve got a handful of Stones and Hendrix albums that belonged to my Dad with his name written on them. Total beater copies but I can’t see getting rid of them not that they’d be worth anything to anyone else anyways. I’ve got some high end pieces as well like Stark Reality and some soul 45s like the Cavaliers Unlimited that I’ll probably let my kids decide what they want to do with eventually.

Skeme – I have yet to meet a collector who has it all but what are you still on the hunt for and does the list get shorter or does it continue to grow?

Dustyfingers73 – Oh man the wantlist just keeps growing, you’d think at a certain point it would get shorter but it never does! I couldn’t even say what my most wanted is right now but I’ll know it when I see it haha