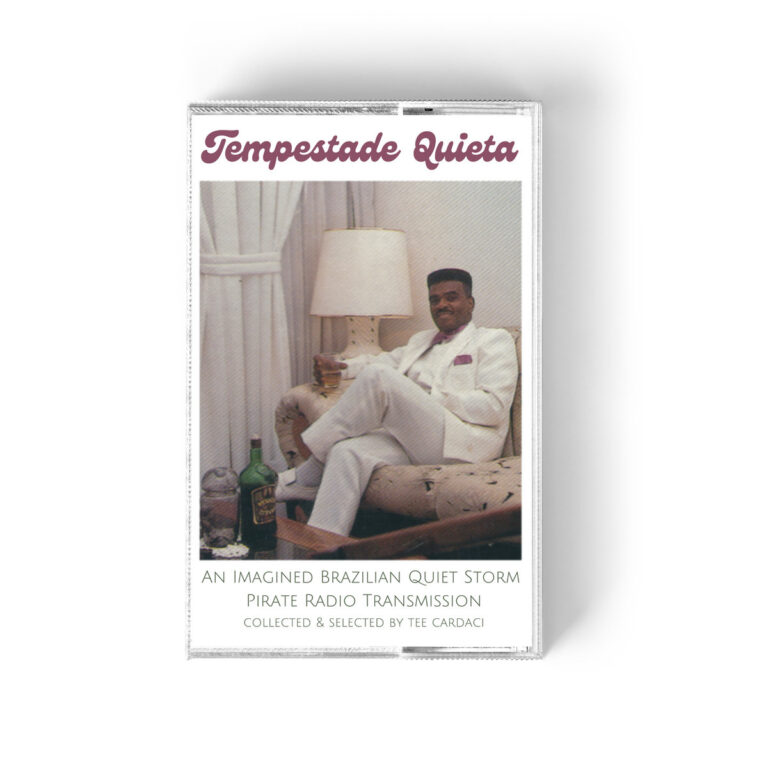 If there’s one thing that I absolutely love about a release or project is a well thought out concept and execution to bring it all together for something amazing. Over the last year we’ve really seen an influx of cassette tape releases spanning genres but we have yet to see one quite like the most recent drop from Tee Cardaci that brings back a sort of early 90’s nostalgia of listening and recording from the radio. Tempestade Quieta: An Imagined Brazilian Quiet Storm Pirate Radio Transmission is just that and is a deep dive into the genre, feel and aesthetic that takes the listener back, even if they have no recollection of being there.

So how does someone like Tee Cardaci who grew up in the DC area in the 70’s and 80’s have such a fond connection to the sounds of Brazil and connect them to the very urban soundscapes of local radio and late night Quiet Storm programs?

“I grew up in the DC area in the late 70s and 80s, the home of Quiet Storm. While it wasn’t my go-to sound at that age, it was part of the fabric of life, always present. Your friend’s mom drove you to basketball practice, Quiet Storm was on her car radio, you know? It was just a sound that was always around me and that I grew to appreciate more over the years.”

“Living and digging in Brazil the past 12 years, I was slowly finding these deep album cuts and 7” b-sides that to me ticked all the boxes of what defined Quiet Storm… slow sexy tempos, slick production, liberal use of reverb, a penchant for sax solos, slight jazz influences, a heavy reliance on synths and an eschewing of social and political commentary in favor of romantic themes. And just as Quiet Storm was always more a vibe than one specific genre, these records I was assembling also were created by artists from different stylistic backgrounds. Some were known as soul artists, while others may have been known for pagode, jazz or even new wave. This project started taking shape in my mind over four years ago, probably spurred by one or two key records, and then I continued to play with the concept on and off over the years until it reached a critical point when I thought, “right, let’s get this together and get it out!”.

“I love a good concept so when it all began coming together, I thought it would be more interesting to present it as if it were an actual radio show that had been recorded by a listener, maybe, as opposed to just a comp of “Brazilian Quiet Storm”. Once I decided to go that route, I knew I needed someone to voice my radio dj, dubbed the “voz da madrugada”, or “Voice of midnight”. I reached out to BNegão, legendary MC from BR hip hop pioneers, Planet Hemp, and he loved the concept and graciously recorded the intros for each side of the tape, setting the mood for my imagined pirate radio transmission.”

“The records themselves range from under-the-radar cuts that can be had on the cheap, if you’re hip to them, to private press rares that trade hands for larger sums. A few of the artists, like Ruban (of Rubinho E Mauro Assumpção) and Dom Mita, will be known to heads for their earlier work but maybe not so much from this era. And two records on here, Carlos Souto’s “Esquina do Amor” and Oswaldo Américo’s “Pecado de Amor” are the only known copies. There’s nothing online about these two sevens and, despite countless hours of research, I’ve yet to find anyone that knows anything about either. The Oswaldo Américo cut even features legendary bandleader and BR synth pioneer, Ed Lincoln on the ARP, making it even more curious that it seems to be completely unknown. All but two of the records were acquired the old fashioned way, getting dirty digging in the field and making personal discoveries. The other two were brought to my attention from digger friends I’d shared the project with and then it became a matter of tracking down copies.”

Filling in the blanks on Tee Cardaci’s history and idea behind this cassette release made it even more intriguing for me to dive in and press play which made my ears feel amazing. The passion and love that went into creating it is felt throughout and shows just how much he loves this music and the time spent in creating a tastefully done project that is in a lane of its own. Although copies are sold on his bandcamp, there are a few copies still available from local brick & mortar locations HR Records in DC, The Stacks in Hayward and Mix Tape Club in Brooklyn.

Don’t snooze, this is a highly recommended listen.