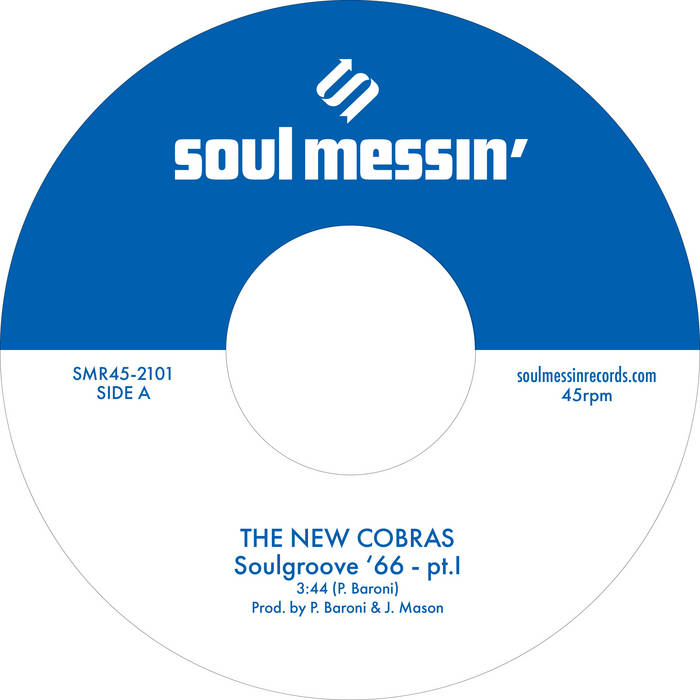 There’s not denying that we love a heavy drum break intro that leads into groovin tune that we can rock doubles of to warm up the floor and work the people out. But sometimes there’s more to song than just the obvious and we love getting the behind the scenes scoop on how things came about when creating it which is the case with the upcoming 7″ single, “Soulgroove ’66” by The New Cobras and The Nightstalkers on what I would consider a nicely done double A sider.

Since 2003, the soundtrack of Melbourne Saturday afternoons was the Soulgroove‘66 show on PBS 106.7FM. The husky tones of Pierre Baroni and his little box of 45’s took listeners on a spiritual road trip each week through the deep archives of soul, R’n’B and funk. Introducing audiences to artists such as George Jackson, Clarence Carter, Sharon Jones and countless others, Soulgroove‘66 fast became a cult radio hit; and when artists such as Eddie Bo, Syl Johnson, Betty Harris, Irma Thomas, or Marva Whitney came to town, they dropped into the studio to appear on Pierre’s show.

Radio broadcast such as Soulgroove ’66 are very important to the landscape of culture and especially Black culture and The New Cobras have pulled off an amazing homage for an occasion that’s meaningful and special. The B-side by The Nightstalkers is another absolute gem that cools things off and slows it down and was designed to be the music bed playing underneath Pierre each week as he thanked the patron members of the Soulgroove‘66 program.

This beautiful double-sider is an excellent listen and showcases Pierre’s final studio work and celebrates an incredible contribution to the global soul community. His vision for the release was to create a new recording of “Soulgroove‘66” under his composer pseudonym of P. Black, played by the fictitious band “The New Cobras”. Partnering with Cookin’ On 3 Burners organ player Jake Mason to co-produce the sessions, the record sounds like an archive recording from 1966, rather than from a suburb of Melbourne in 2021. The results showcase Pierre’s incredible talent and ear for detail. He wrote the song, created the arrangement and directed the recording sessions, passionately ensuring the song was recorded in mono, in line with his favourite era of music. He even chose the cymbals the drummer used.