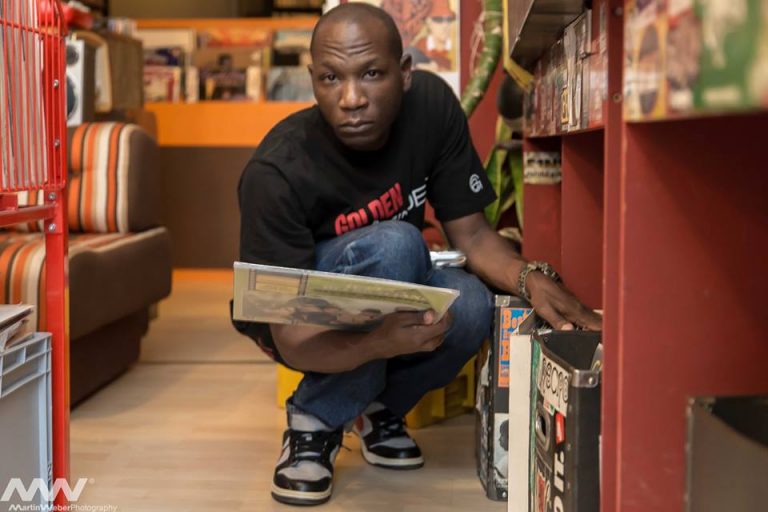 Skeme Richards was recently interviewed over at Official Crate Music. The newly launched site is an online record store stocked with rare and not so rare records from across the globe available for sale. In addition to selling records, they conduct interviews with record collectors and diggers of choice so far including Supreme La Rock and Gensu Dean.

Give us a brief history of Skeme Richards…
I’m a DJ, Producer, burger connoisseur and a collector of all things fresh that started DJing in 1981.  I’m from Philly… the home of the DJ and travel the globe playing records while familiarizing my brand [Nostalgia King] to the world.

I have big respect for Philly DJs.  I went to college near Philly in the late 1980’s and alot of my friends were either from Philly or from South Jersey.  All I would hear about were the Philly DJs like Spinbad, Cash Money, Jazzy Jeff, etc.  Philly is definitely the second city of Hip Hop and I heard about you a long time ago.  Big respect to you.  I know that you are also known as the “Nastalgia King”.  What other things do you collect besides records?
I guess you can say I’ve been a collector since childhood even though I wasn’t conscious of starting a collection because I was just keeping things around me that I liked.  But my collection varies and contains of course records but also rare performance footage, old school TV shows, cartoons and movies on VHS, vintage movie posters, toys from the 70s like GI Joe with the Kung Fu Grip, Star Wars figures, handheld electronic games, pinball and arcade machines, race car and train sets, comic books and also art.

What’s the greatest Kung Fu flick ever made (besides “Enter The Dragon”)?
Enter The Dragon is such a classic and it’s hard to even match that film because Bruce Lee is the king but I would have to say 5 Fingers of Death because that was the first movie to hit the theaters here in the states and created the Kung Fu movie craze.

I know that you DJ all over the world, B-boy events, Funk 45 parties etc. Where is your favorite spot/city/country to play in?
It’s always hard to pick just one place because I’ve had great times in so many countries but Japan always tops my list because of their appreciation of black music and black culture in general.  Playing Funk, Soul, Jazz and Rare Groove there always feels so good.  I could play at my favorite spot called The Room in Tokyo one night Osaka the next and Fukuoka the following and that same energy travels across the country.  But I will say, when playing House music, I love Amsterdam!

I love overseas breaks/grooves the most…what country do you like to dig in most?
I would definitely say I love digging in The Netherlands (Amsterdam, Rotterdam, Utrect etc) the most.  I always find so many records there that haven’t left the country or are below most people’s radar.  A few years back I really started digging up on Dutch Modern Soul records and got hooked.  But there’s so much to be discovered in that country as with so many European countries.

What style/genre do you like to collect most?
That actually changes from time to time.  Early on I was of course looking for Jazz or Soul records to sample from.  But as I got older and my ear and tastes matured I started appreciating things different and not so much for the sample but to listen to as a whole.  But when I’m out on the hunt looking for records the first things I search for are soundtracks, Funk 45s and Japanese female soul records from the 70s.

Head over to Official Crate Music to check out the digs and read up full interview on what Skeme Richards has to say.