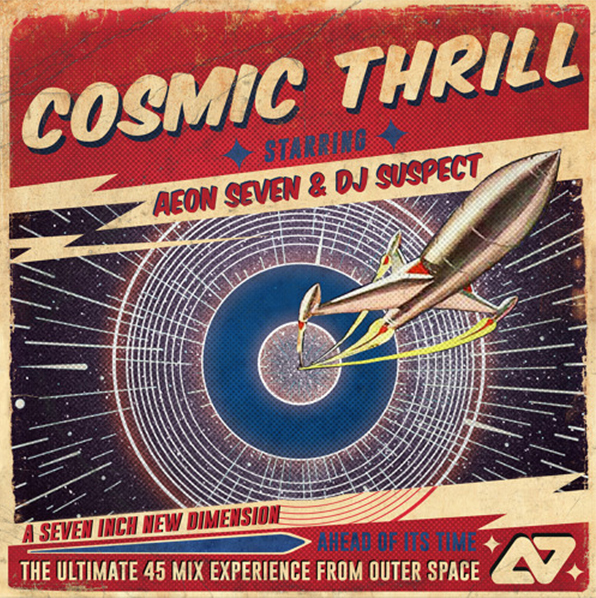 One of the things that always separated DJ’s from one another were their mixtapes and how their selections and presentations differed from others in their craft. At a time where creating these productions were done the hard way (i.e. analog), there were more tapes being dropped to keep the listener, digger and sample snitcher filled with their fair share of listening pleasures to keep them satisfied. But in the very visual era of Instagram, many DJs prefer for floss their records instead of putting in the time of actually creating something worth much more than just a like.  Two DJ’s who are getting back to basics and have put in quite a few hours over the last couple of years to create their “Cosmic Thrill” is DJ’s Aeon Seven and DJ Suspect.

In the same vein as previous highly regarded mixes Product Placement and Brainfreeze by Cut Chemist and DJ Shadow, the duo of Aeon Seven and DJ Suspect blast off into the stars with their all 7″ mix of breaks, beats, soundbites and funky 45’s to bring you a new dimension in sound. Cosmic Thrill is clean and well thought out showcasing a classics while highlighting a few gems not used on previous mixes of this sort.

Not making it’s full debut until March 1st, but you can get a sneak peak here to prepare for future intergalactic travels with these two gents.

And peep the slick video trailer that they’ve created.