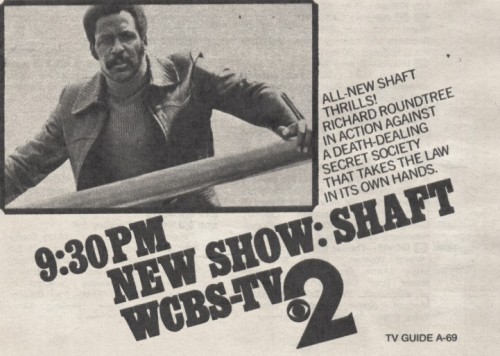 Whenever we have a little down time here at the office, we like throw in a VHS and revisit a classic TV show or movie previously recorded from network television from prior years that we haven’t seen in a bit. Today is one of those lazy, holiday Monday’s where we’re doing just that so we’ve decided to dip into the short lived detective drama Shaft.  Based on the hit Blaxploitation film directed by Gordon Parks, Shaft was turned into a series of TV movies that aired along with Hawkins and other TV movies during 1973-74 television season on The New CBS Tuesday Night Movies. Broadcast every third week, the series was based on the three films beginning with Shaft (released in 1971), and starring Richard Roundtree as private detective John Shaft.

Because it was aired on over-the-air television, CBS felt that the characters needed to be toned down. Now instead of working against the police, he worked with them, possibly because it rotated with Hawkins, another high-quality series but with a starkly conflicting demographic, and was cancelled after one season. Contemporary analysts suggested that since the two shows—Shaft and Hawkins—appealed to vastly different audience bases, alternating them only served to confuse fans of both series, giving neither one the time to build up a large viewership. Richard Roundtree himself has publicly expressed his disdain for the small-screen version of Shaft.

If done correctly, this could’ve had a nice run and been more but with 7 TV movies in the can, we’ll take it over having nothing at all.