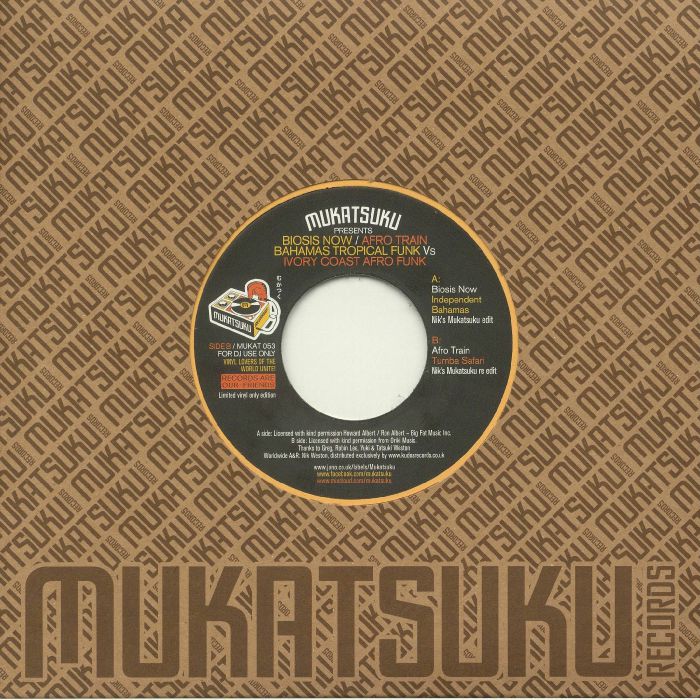 Mukatsuku Records has really been hitting the nail on the head with their “presents” series of 45’s, each exploring different musical territories and genres from across the globe.  Their latest releases which arrived in the post today are nothing short of quality must haves and funky in every way via the Ivory Coast.

“After Mukatsuku Records summer Hammond Organ screamer from Billy Hawks (MUKAT 052) the label goes deep on an international funk tip. Few years ago Nik played in France and the promoter pulled out a Biosis now 45 that he never knew existed up till then and was generally thought to be a long album track only. An extensive search revealed nothing online including popsike/discogs etc except a tropical seller who’d just bought a huge caribbean collection with the record included saying he’d never seen it before either and he was keeping it…Failing to secure a copy themselves the label licensed it instead and created their own 45 edit which retains all the funk & soul of the elongated album version into a 7 inch friendly format. In september 2017 a copy turned up on ebay for the very first time and promptly sold for almost $700 so this official reissue should at least save you a few dollors ! On the flipside and 1973 Tumba Safari from Afro Train get’s a funky afrobeat re touch re edit for peak time club play that would save you several hundred pounds on an original if you could actually find a copy!”

“Two killer tracks licensed from Oriki Music,mastered by Frank From Sofrito at The Carvery and taken from the recent Akwaba Abidjan compilation. These two monsters from De Frank Jr are straight up deep and funky afrobeat from 1970’s Ivory Coast. More essential dancefloor delights from Mukatsuku – strictly vinyl only & singles only.”