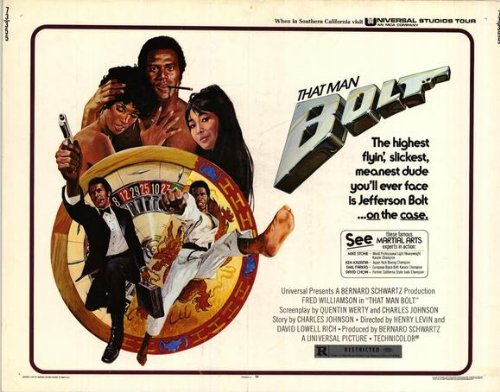 It’s Sunday and we like to start our day out here at Nostalgia King with brunch and a screening of some of our favorite flicks.  Today we’ve set the projector up and diving into one of Fred Williamson’s lesser talked about films, That Man Bolt (1973).  Yes, Black Caesar and Hell Up In Harlem are the go to, but we’ve seen those more than our fair share of times so we’re opting for something a little different here.  Filmed in Hong Kong, Macau and the USA and featured several martial arts experts in action: Mike Stone, World Professional Light Heavyweight Karate Champion, Kenji Kazama Japan Kick-boxing Champion, Emil Farkas, European Black Belt Karate Champion and David Chow, Former California State Judo Champion. It was titled Operation Hong Kong outside the United States. Peter Crowcroft wrote the novelization of the screenplay.

Combining the Blaxploitation and martial arts genres with a bit of Bond like super spy aesthetics, the film follows courier Jefferson Bolt (Williamson) who is asked to take a briefcase from Hong Kong to Mexico City, but he is not told what is in it or the identity of the man who asks him, a man named Griffiths. Convinced he will get good pay and see a few good places, Bolt takes on the job, while looking out for anything suspicious. Soon he does find exotic places, beautiful women, and ruthless gunmen interested in the briefcase.