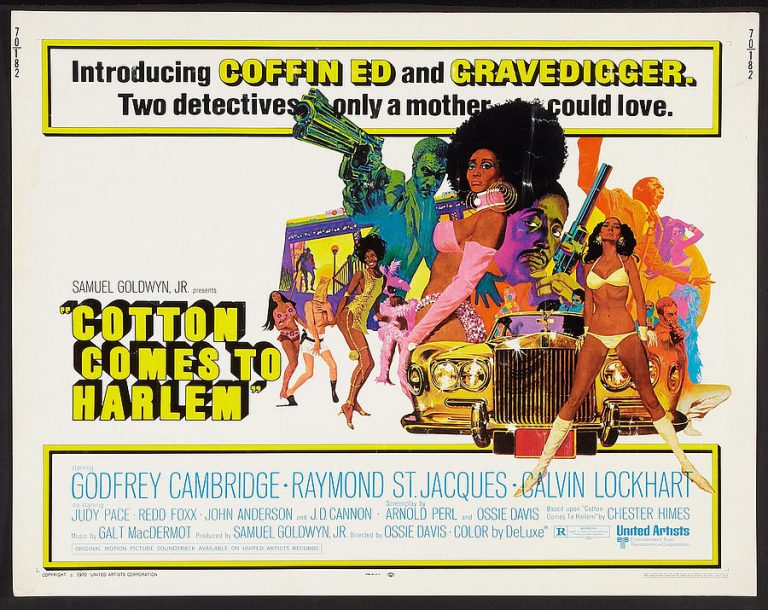 On this day in 1970, the Ossie Davis directed and original Chester Himes written story for the Blaxploitation classic Cotton Comes To Harlem makes it’s theater debut featuring an all star cast including Godfrey Cambridge, Raymond St. Jacques, Calvin Lockhart, Redd Foxx, Judy Pace and more in this tale of a bundle of cotton that lands in Harlem.

“Reverend” Deke O’Malley, a conman, is selling shares at a Harlem rally, for the purchase of a Back-To-Africa movement ship to be called The Black Beauty. During the rally, several masked gunman jump out of a meat truck and steal $87,000 in donated cash from the back of an armored car. Two Harlem Detectives, Gravedigger Jones and “Coffin” Ed Johnson chase the car, and a bale of cotton falls out of the vehicle, unremarked at the time. Uncle Budd, a scavenger, finds the bale of cotton and sells it for $25 to a junk dealer, but later buys it back for $30. There is a reward out for the $87,000, and Gravedigger and Coffin deduce that the money was probably hidden inside of the bale which had fallen out of the getaway vehicle during the chase. After accusing Reverend O’Malley of stealing the money and taking him captive, Detectives Jones and Johnson are able to blackmail Tom, a mob leader, to give them $87,000 – to be restored to the original donors – after discovering that Uncle Budd has run off with the stolen money and emigrated to Ghana, to live in retirement with his ill-gotten gains.