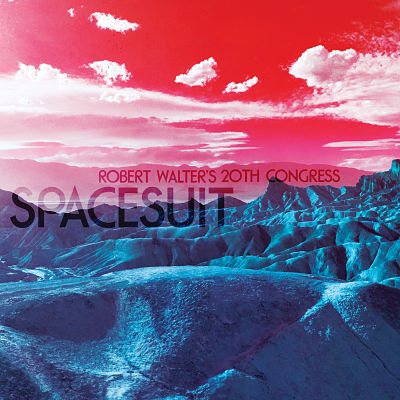 What do you get when you combine some of my favorite things like science fiction, comic books and art while pulling from a wide range of influences including 60’s and 70’s Funk, organ Jazz, Dub Reggae, Krautrock and jazz-rock fusion? Something spacey in the way of the upcoming Robert Walters 20th Congress “Spacesuit” LP which the recently released one of the cuts “Current Features” from their soon to be released album.

The organ master/keyboard virtuoso—who’s also a founding member of The Greyboy Allstars and tours with Phish bassist Mike Gordon—has assembled a new crew of brilliant improvisers and genre-bending virtuosos under the 20th Congress mantle. Drummer Simon Lott (Kool Keith, Charlie Hunter) is a longtime collaborator who brings a refreshing unpredictability anchored in deep-rooted New Orleans rhythms. Bassist Victor Little (Billy Preston, Charlie Musselwhite) started sitting in with the band on a series of West Coast gigs and gradually became essential to the evolving sound. Guitarist Chris Alford(Cassandra Wilson, Mike Dillon) has worked extensively with Lott in New Orleans, bringing a baked-in chemistry that has mutated into the infectious sound of this incarnation of the 20th Congress.

A major inspiration for creating the ‘Spacesuit’ material was ‘Jodorowsky’s Dune,’ the 2013 documentary about the jaw-dropping sci-fi epic that never was. Chilean filmaker Alejandro Jodorowsky, known for his cult mind-benders ‘El Topo’ and ‘The Holy Mountain,’ had planned a version of Frank Herbert’s ‘Dune’ that would have starred Mick Jagger, Orson Welles and Salvador Dalí, with concept art by H.R. Giger and Chris Foss and music by Pink Floyd and Magma.