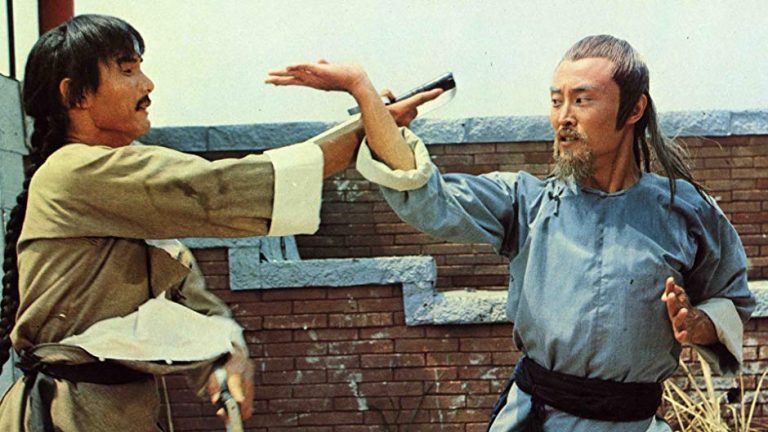 One of the highly influential Kung Fu films which inspired many NYC Bboys including Rock Steady Crew’s  Ken Swift is the Joseph Kuo directed, 7 Grand Masters (1978) which Ken Swift patterned his crew name of the same title after seeing the movie in theaters.  7 Grand Masters is a film that I’ve seen a bunch of times and never seems to get old so on this Shaolin Sunday, we’re taking a trip downtown to catch a flick.

Sang Kuan Chun is an old kung fu master who is getting ready to retire from martial arts. But just as he is about to put up the kings signboard and call it quits, he receives a note alleging that he’s not the best. Thus begins his journey for one last challenge with each of the Seven Grandmasters to prove his superiority. As Sang Kuan Chun and his three students travel from one challenge to the next, the foursome acquires a fifth—a young man named Siu Ying who wants desperately to train under master Sang Kuan Chun to avenge his father’s death. So he tags along, despite the master’s insistence that he will not accept any more students. Eventually we learn more about the master’s past.

His own teacher, before he died, left him the secret book of The Pai Mei Twelve Strikes. However a masked man soon stole several pages of the book, leaving only nine strikes. So, somewhere out there, is this unknown man, and he has the final three strikes of Pai Mei, which are the most deadly and can beat even the other nine strikes. Sang Kuan Chun soon accepts the seemingly devout Siu Ying and teaches him the nine known strikes of Pai Mei. Siu Ying ends up learning from his “uncle” that Sang Kuan Chun (who was set up) killed his father during a friendly tournament. Siu Ying is taught the final 3 strikes from a mysterious figure and almost kills Sang Kuan Chun until he being a loyal good student couldn’t break his teacher’s rule of “Never kill anyone if it can be avoided”. This all leads up to an exciting climax, where we learn the identity of the masked man who stole the Pai Mei final strikes and the identity of the man who killed Siu Ying’s father.