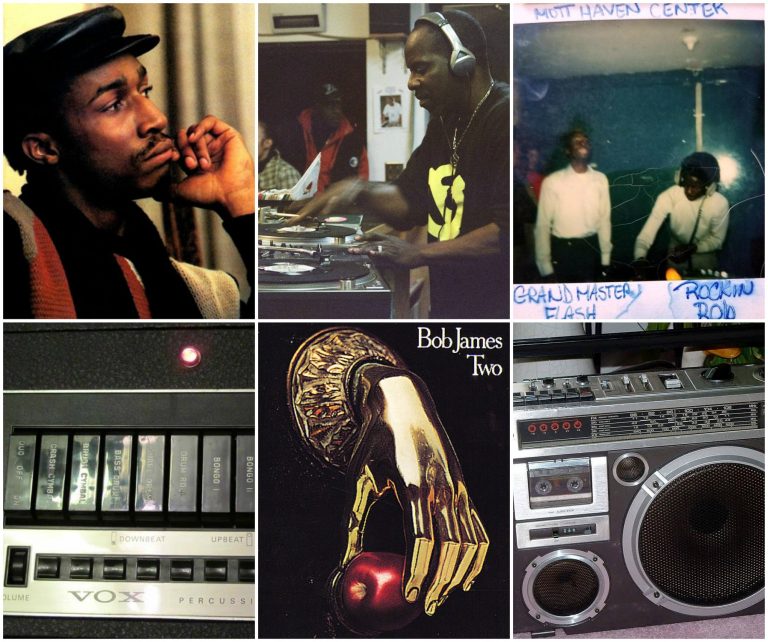 Troy L. Smith is a true historian and preserver of Hip Hop culture from an era that only exists in most peoples memories, by way of live cassette tape recordings, photos and vintage flyers of events that played in the clubs and parks in and around New York during the most important years of it’s history. Always going the extra mile weather it’s showcasing audio from his vast collection or featuring interviews that he’s conducted with both the famous as well as the unsung heroes of DJ’s and MC’s, Smith recently conducted an interview with D.J. Rockin Rob on his meeting with Grand Master Flash one night circa 1980 at the Mott Haven Center that they both were billed on. A friendly back and fourth session on the decks pulling records from Rob’s crates showed the skills of both DJ’s and although some considered it a battle of two greats, it was nothing than an exchange of talents.  As Rockin Rob states “To me a battle is when you call somebody out!” and this is where we’ll begin this interview conducted by Troy L. Smith  (who we want to thank for allowing us to republish here at Nostalgia King). Now if we only had audio from the night at Mott Haven Center, that would be the nail in the coffin!

Rockin Rob: I was at Mott Haven Center one night when people said Flash and I battled, but it really wasn’t a battle. To me a battle is when you call somebody out! This was like 1980. It was funny because Flash was on a flyer with us at Mott Haven Center and my building was right next to the center, special guest was Flash and the Furious 5. Also on the flyer is us, Rocking Rob and the Fabulous 4 Connection, emcee Barry Bee, Crazy Eddie, Little Rich and number one female emcee Lil Bit.

We were doing our thing and the night is going good etc. Flash shows up and Troy you know when Flash walks into the room it’s like Moses parting the Red Sea type thing. Everybody moves to the side as Flash makes his way on to the stage.

I’m up there doing my thing and I’m cutting Jackie Robinson’s Pussy Footer at the time and Flash goes, “Yo cuz, can I get some of that!? I said no doubt.” So he takes his cartridges out, because Flash use to walk around with his own cartridges, I don’t know how often but I guess if he knew he was going to play some where he brought needles with him. So he changed my cartridges and put his in and he started cutting up. So he then asked, what else do you have, I pulled out I can’t stop and threw that on. Flash then says to me, “Whatever I do you do!” So I took one of his cartridges out and one of mines is in and one of his is in and we going back and forth.

He does whatever he does, finesses on one side and…it’s almost like follow the leader. When he spins around I spin around, so on and so forth. Now the icing on the cake is I had the Beatbox out there and he asks does it work. I said yes go ahead and play it being as you are our special guest, and he starts playing the beat box.

So he starts doing his thing off the beatbox with Mele Mel and them on the mic doing their thing. So basically he says to me catch it on the fourth note! So he hits it four times bomp bomp bomp and instead of him getting ready to hit, I put my finger in and I started playing it and the crowd just started tripping, because I started beating the s— out of it! Anybody who was there will tell you this story.

So I’m playing the beatbox my way and the icing on the cake was I started playing Mardi Gras on the beat box and that was it.

Rob: That was it, game over! Mele Mel got on the mic with the rest of the Furious emcees and they just started rhyming. Mel was like, “Yo keep that going, keep that going!”

Rob: Yes sir, and after that in the hood I made history. They were like, “YOOOOOO MY MAN!!!” Not to say I down played it, but I’m one of those cats I am only as good as my next event. It was cool but I am not going to brag about it. I just wanted my work to speak for itself, I wanted my own voice.

Troy: So do you have that tape from that night?

Rob: You know what’s crazy I don’t have it per say but two people had it. One person had it and lent it out and you know what happened, it was gone. Another person from the Casanovas had it. That night the party at Mott Haven ended around one and I was upstairs in my apartment getting ready to go to sleep and this Casanova whose name I cannot remember at this time had a JVC Big Mouth radio (Boom Box.), you know the one Troy with the ten inch woofer and a small tweeter right next to it and it is louder then nobody’s business and I heard him down the block with the radio on his shoulder, Hip Hop style, playing the party I had just been in rocking! I was like, “Oh s—!” And he had the tape. But I never got a copy of that tape because if I did I would have had it to this day.

Rob: If you ever hear the story that I battled Flash that is the night they are talking about in Mott Haven. Now what’s funny is after a while when people say something it becomes real. But I had to really digress and tell the community lets tell the truth about what happened that night at Mott Haven. A battle is when someone calls you out. Flash didn’t call me out and I didn’t call him out.

Troy: And Flash didn’t say you couldn’t do it. He just said do what I do as if to say, can you do what I do!

Rob: I think in his heart of hearts Flash respected me because he knew what I was capable of doing. From that day on he knew what I was capable of because prior to that night Tiny of the Casanova Black Spades was my manger and he kept telling Flash, “Yo I got this cat across town and he is up and coming etc etc etc.” So I knew about Flash but I never really knew him personally as far as what he was really capable of doing and he never heard me until that night. The Furious emcees respected me from that night on. If I see Mel he gives me love the same with Rahiem, Scorpio, Kid Creole and God Bless Cowboy.