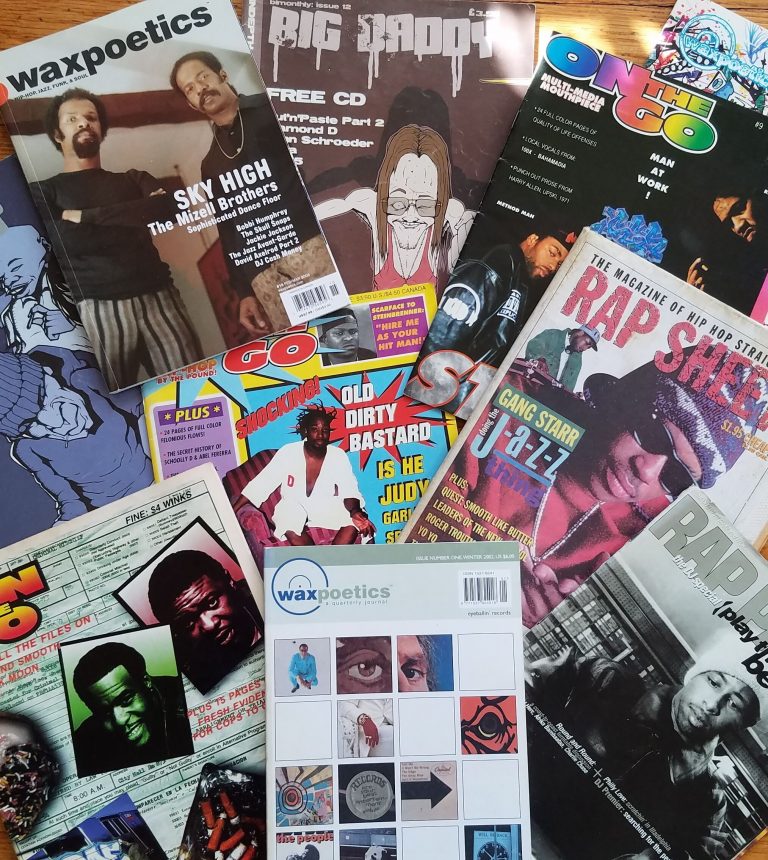 Digging In The Pages

I’ve always loved picking up a great magazine filled with articles on topics that I enjoy or contribute to various things that I’m into. Weather it be some sort of collector / hobby magazine, home design and decor or DJ / music mag, reading stories and seeing pictures often inspired you to dig deeper into the ever evolving realm of what’s out there. One of the things that we’ve noticed is the change in the way that people connect genres of music today versus the late 80’s and 90’s into 2000’s. With even more of an avenue to be exposed to music these days, it seems that less people venture out of what they are into. For us 80’s / 90’s era DJ’s, producers and music lovers who were into Hip Hop, we found ourselves digging for genres outside of that spectrum which contributed to our production or DJ sets while at the same time opened up new listening interests that exposed us to other sounds. Of course we dug into Jazz records by greats like Bob James and Lou Donaldson which in turn led us to deeper records not only within the genre but also into others including library music. Who would’ve guessed that rocking doubles of Rock records like Babe Ruth would help us make our way to heaters like Power of Zeus?

Fast forward to the present and there seems to be a disconnect between listening to multiple genres. Your typical rap fan or new producer isn’t thinking about what song was sampled for that Kanye West or Jay Z album or what made that beat sound like it does. They’re too busy thinking how they can be the next big name producer to be featured on all the blogs without any knowledge or history of musical artists sampled that were used to help build the foundations of the rap genre. There was a time when you went to the club and the DJ played an 80’s R&B or dance classic track and you instantly recognized it and said “oh shit, that’s where (insert producer name) got that sample from. It then made you seek out that song as well as others from their catalog to not only sample from but to listen to. Multiple factors contribute to the disconnect but one of the main reasons is the lack of music publications that did a great job of covering different genres. On one hand you had music magazines like The Source, Wax Poetics, Rap Pages and Big Daddy which would feature various genres, the artists themselves as well as producers and DJ’s who utilized those records. Those magazines would also cover other topics of the culture including graffiti, Blaxploitation and Kung Fu films, video games and whatever was cool within the scene the had a certain aesthetic to it. One the other hand, you had graffiti magazines like On The Go that understood the culture and would feature DJ’s as well as articles on the latest Funk 45’s releases. On the visual production side of things, both On The Go and Graffiti TV produced VHS tapes featuring graffiti with amazing background soundtracks heard with everything from Jazz and Hip Hop to Funk. All of those magazines could go from the importance of David Axelrod and Galt Macdermot to how Steinski was inspired to make the legendary Lessons series after going to clubs uptown and hearing Hip Hop DJ’s string breaks and beats together in the 1980’s.

The defining factor of why things have fallen the way they have isn’t necessarily that there are no longer the abundance of print publications because sites like Nostalgia King, Flea Market Funk and a handful of others are helping to pick up the slack and spread the knowledge while writers like Philadelphia based John Morrison continues to connect the dots both in written form and now on his WXPN show, Culture Cypher Radio. But ultimately it’s the lack of music lovers who are actual journalists and historians and who can research and write about why a particular recording made an impact or why something refreshing and new needs to be heard.  When I think back to all of the articles and interviews that I’ve read in magazines, most were written or conducted by not only music lovers but in fact DJ’s who were skilled with a pen or pocket recorder to capture an interview. In the present day though, there are still a handful of self published magazines that are helping to carry on tradition including Disco Patrick’s Hot Stuff magazine which I’m a writing contributor to (next issue drops in October), Dig Mag, Love Injection, Streetlove Magazine and a few others.

Bonus questions since we’re on the topic, but what happened to DJ’s wanting to write about music, has everyone just become a hoarder of it and a flosser of it on social media instead? That’s a question for another day but in the meantime, keep digging for the music and supporting what music publications still do exist. There might actually be a time when those of us who do the homework for the rest and create these stories will stop doing so and leave a major void in the community.