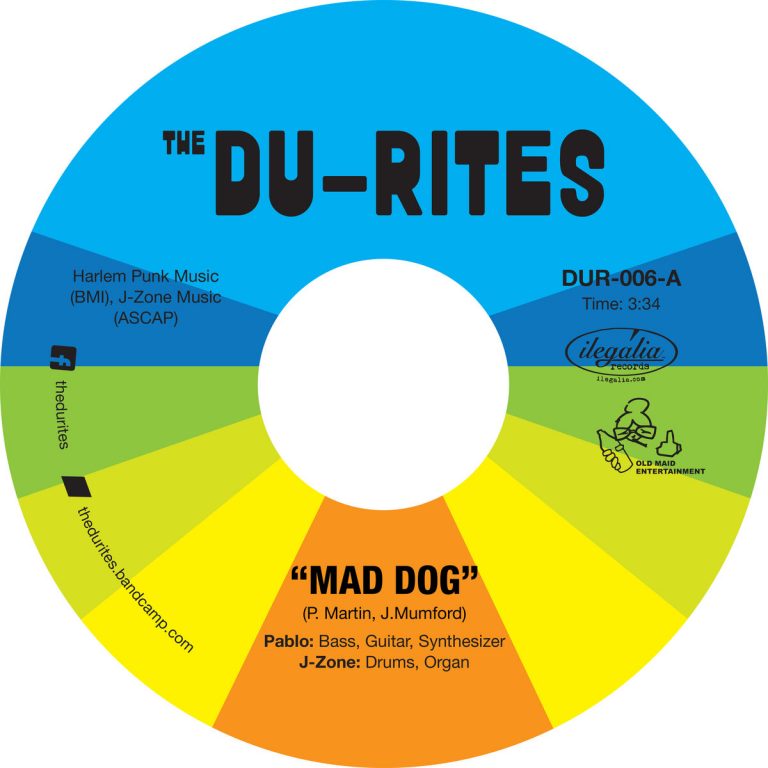 The Du-Rites are on par to release more 7″  per year than James Brown did on both King and Polydor combined and we’re loving it! Not having to wait for new music from your favorite artists is what keeps our daily listening rotation fresh and with the notice of an upcoming full length to be released in 2020, we’ve gotten even more treats to be excited about.

“The dynamite instrumental would be the A-Side, “Mad Dog”. It starts with an off-the-wall, polyrhythmic drum solo, before gradually easing into an uptempo and somewhat unorthodox (yet still dance floor friendly) groove from J-Zone. The pocket goes deeper once the bass joins in, and the four car collision of distorted combo organs, analog synths, rolling tambourines and Pablo’s turkey grease Blaxploitation guitars put a spooky Psychedelic spin on The Du-Rites’ trademark brand of funk.”

“Candid vocals and humor are also a part of The Du-Rites approach, and though the A-Side is strictly for the groovers and shakers, the flip has a little for everyone. Pablo’s rolling funk bassline and honorary band member Bruce Martin’s (no relation) congas anchor a mean and nasty mid-tempo cooker that’s much heavier in feel than the A-Side. J-Zone’s open hi-hat barks throughout play off the rest of the rhythm section for a lock so serious that the guitar and keys only need to leave a tip and the silly banter – a nod to both cheap fragrance and Kool & The Gang’s 1970 classic, “Funky Man” – doesn’t get in the way.”