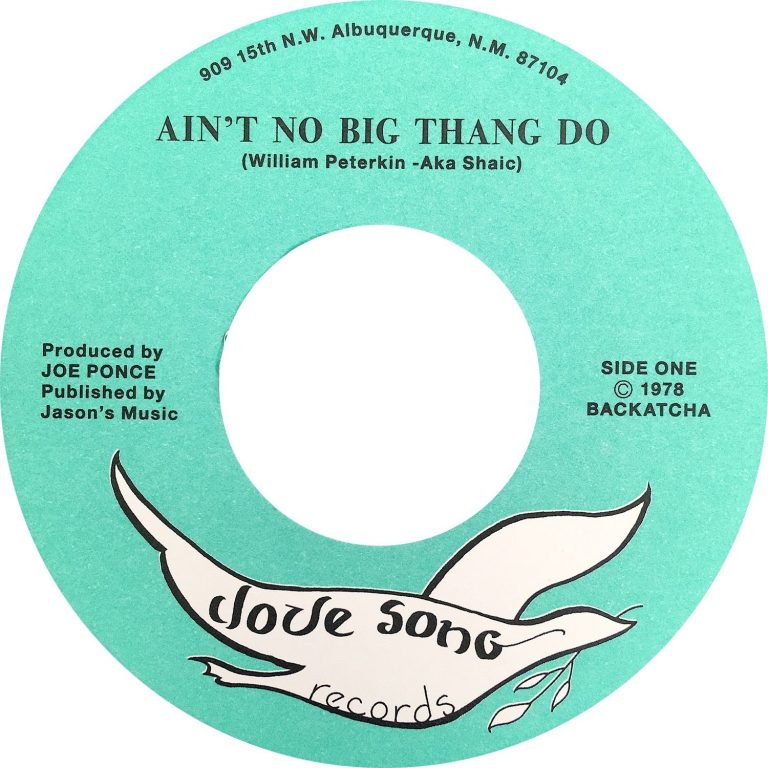 Aka Shaic – Ain’t No Big Thing Do

Released on a shoestring by three musician friends in 1978 in Albuquerque, New Mexico, this ‘desert soul’ double-sider obscurity surfaced onto the collectors scene a decade ago thanks to DJ and label-owner Russell Paine (Super Disco Edits ) “I see a copy on ebay. It really wasn’t gaining too much interest but I thought it was a special sound … I really was keen to find out more knowledge of its players and history. Alberquerque I don’t think is rich for soul music, so wasn’t long before I was in touch with Jose who gave me all the lowdown. Stories of hard times etc. Funny, he actually couldnt believe anyone liked the songs! I’m sure he has told you many stories… It’s a cherished record” explained Russ.

Self-penned, produced and distributed locally by the artists, co-writer and guitarist William Peterkin (pictured) saw another composition of his released in that same year with Donny Hathaway’s single ‘You Were Meant For Me’. Meanwhile, two-thousand miles west of Atco Records major label New-York office, Dove Records makes it’s debut with singer Aka Shaic aka Douglas Cobbs.

As told by producer Jose Ponce:

Albuquerque, at the time, had a small, but loyal following for jazz. One of the patrons of a small, downtown jazz club was an older woman named Hope Barre. She was widowed and often invited jazz musicians to her house after hours to continue the jam sessions there. One night, I showed up and was introduced to Pete-from-New-York, a tall, lanky guitar player and his energetic, wild haired friend, Aka Shaic.

Pete (William Peterkin) had come to New Mexico attached to some girl, whom he quickly abandoned in search of greener pastures and Aka Shaic, well… nobody really knew much about Aka Shaic. He didn’t have an actual job or a home but because he seemed to have a lot of friends, he drifted from house to house. Pete and Aka Shaic had met at somebody’s home during a jam session and hit it off, personally and musically. Pete played upright bass and was a brilliant guitar player, Aka Shaic played a beat up nylon string acoustic guitar. Both were brilliant songwriters.

At the time, Aka Shaic was hanging around a small recording studio co-owned by Bill Hunter and a native American woman who called herself Cherokee Darlin and claimed she was the inspiration for the Bob Wills song of the same name. The studio was located in the southeast part of Albuquerque called the ‘War Zone’ because of the high crime rate. Aka Shaic helped Bill keep the place clean, set up the mics and deliver bunches of 45 RPM records to clients.