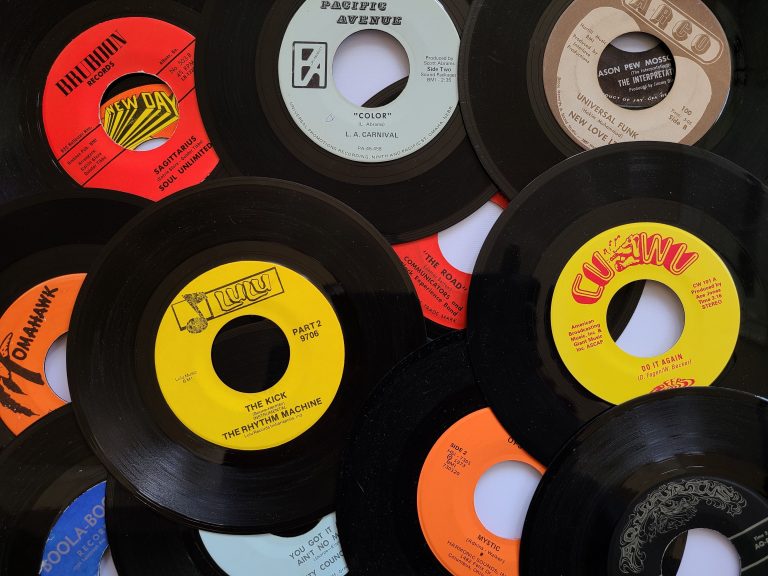 The History of #45Friday

A few days back while having a conversation with a fellow music journalist, we discussed the difference between how content goes “viral” in the social media age versus a slow burn of popularity growing in a small demographic in one area before reaching another. The ease of something gaining popularity in a visual world is much easier than it’s ever been. Before social media, if you saw something say in a magazine and wanted it, you had to find a local shop that carried it which most likely was not happening. Another option would be to have a friend or relative in a cool city like New York, Philly, London or Tokyo who could buy the item and mail it off to you. This was especially big during the sneaker collecting era of the 90’s when finding certain grails or vintage models became popular to obtain. Another option would be to fly or drive to the actual city or country to dig, which as record collectors and collectors in general would do on a regular basis. Knowing what you were after and doing research before spending your travel expenses was an important factor in the hunt and saved you from wasting time and money.

With the present era of things going viral, the hashtag # (or pound sign as we referred it do in the US) makes it so that finding whatever you’re into or looking for is a few buttons away. Which brings us to the topic of the day, the ever popular # amongst DJ’s and record collectors, #45Friday. Have you ever thought about where #45Friday came from and how it became popular? Probably not so let’s give you some insight on it’s humble beginnings before the world caught on.

Early on via Twitter on Friday’s there would be a battle amongst a very small group of collectors, 6 to be exact, Kenny Dope, Supreme La Rock, DJ Scratch, Breakbeat Lou, DJ Spinna and myself. It was a way to for each of us to floss the rarest pieces in the collection consisting of primarily Funk 45’s, sweet soul 45’s, Rap 45’s (before they became sought after and overpriced) and breaks and of course, a strict policy of originals only (test pressings included) was the only way to go. Each week the anti would be up’d with more rare selections which included Billy Squire’s “Big Beat” promo 45 which I had for years and never really cared about. A $10 everyday 45 (when you could find one) immediately turned into a $100 on eBay which I literally watched happen overnight after posting it. Watching Kenny Dope aka Debo pull out the rare Funk 45’s of records that he probably paid $50 for back in the late 90’s which are now $1000 records on Discogs or Supreme La Rock hit cats in the head with some crazy odd ball private press Seattle shit is what kept the exchange fun but also kept it so that not just anyone could jump in and tag you while posting the most common basic shit. Slowly after people caught on to what we were doing, other fellow collectors joined in on the fun including J.Rocc (Beat Junkies) who would shine light on something unknown picked up from one of his many international travels as well as a few other deep diggers. Within months, Twitter was running amok on #45Friday which was fun to see. Beating people to the punch at 11:59pm on Thursday night just so that you could get a jump on posting felt like waiting for your parents to go to sleep so that you could sneak out to a party.

Fast forward to the present and #45Friday still exists, although not in the same spirit that it originally began with. It’s become really nothing more than a #, especially when people post 45’s everyday but on Friday will use the #45Friday as if it’s any different than their Sunday through Thursday postings. By the time #45Friday started running the course, we started tripping out with #12inchTuesday posting rare Disco 12″ which lasted for a while as well as #TestPressTuesday which kinda got silly and very nerdy. But it’s no doubt that a simple # can take on a life of it’s own and go viral. Have you ever tried typing something as simple as #catlady? There’s 6 million Instagram posts of the most adorable cats across the globe that have become social media famous.

But there you have it, the history of #45Friday because I’m sure, most people didn’t know or probably never thought about how a simple # became famous.