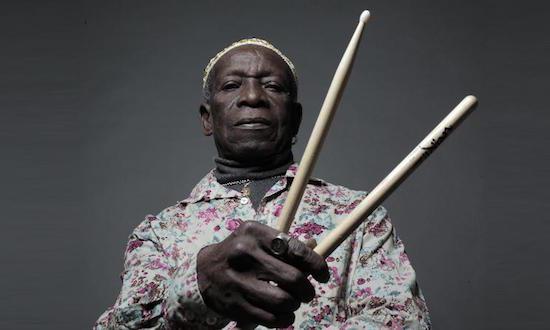 Today the world lost a legendary drummer and father of Afrobeat with the passing of Tony Allen. A name that should need know introduction, Allen was the drummer and musical director of Fela Kuti’s band Africa ’70 from 1968 to 1979, and was one of the primary co-founders of the genre of Afrobeat music. A self-taught musician, Allen began playing a drum kit at the age of 18, while working as an engineer for a Nigerian radio station. Allen was influenced by music his father listened to Jùjú, a popular Yoruba music from the 1940s, but also American jazz, and the growing highlife scene in Nigeria and Ghana. Allen worked hard to develop a unique voice on the drums, feverishly studying LPs and magazine articles by Max Roach and Art Blakey, but also revolutionary Ghanaian drummer Guy Warren (later known as Kofi Ghanaba – who developed a highly sought-after sound that mixed tribal Ghanaian drumming with bop – working with Dizzy Gillespie, Charlie Parker, Thelonious Monk, and Max Roach).

n 1964, Fela Kuti invited Allen to audition for a jazz-highlife band he was forming. Kuti and Allen had played together as sidemen in the Lagos circuit. Fela complimented Allen’s unique sound: “How come you are the only guy in Nigeria who plays like this – jazz and highlife?” Thus Allen became an original member of Kuti’s “Koola Lobitos” highlife-jazz band. In 1969, following a turbulent and educational trip to the United States, Fela and the newly renamed Africa ’70 band developed a new militant African sound, mixing the heavy groove and universal appeal of soul with jazz, highlife, and the polyrhythmic template of Yoruba conventions. Allen developed a novel style to complement Fela’s new African groove that blended these disparate genres. Allen recorded more than 30 albums with Fela and Africa ’70 and by 1979 left the group to start on a new quest and continued to record albums until 2020.