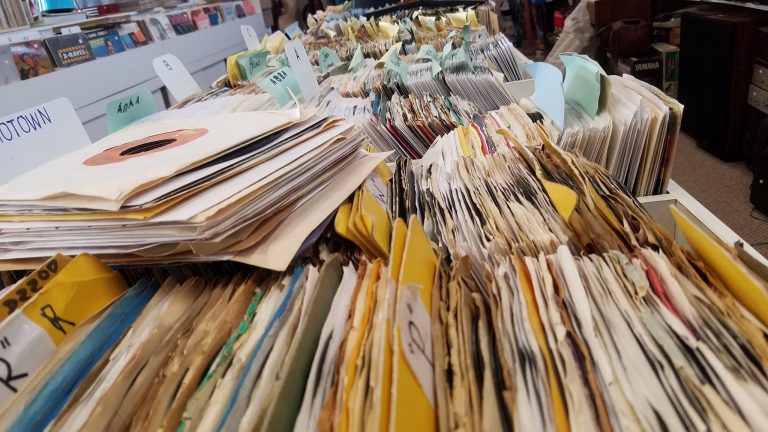 Up And Down And Around We Go

While sitting on the deck yesterday after a crazy tornado like storm rolled through the city causing brief power outages, I revisited some old magazines and reading material trying to muster up some inspiration to do some writing. While doing so, I came across an old article from 2000 in Big Daddy that talks about eBay and how all of the pricing for records are suddenly all over the place with no rhyme or reason. Keep in mind, this is at the very dawn of eBay and written in an “at the time” perspective. We can all agree that today, the same stock market evaluation of records pricing is still in the same state as it was in 2000 when dealers first started listing records for sale.

The conversation today amongst record buyers and collectors hasn’t changed much in years, the topics of rarity, “is it a limited pressing”, originals versus reissues, condition and pricing are just a few of the many that many of us have on a daily basis in this crazy world of collecting. But with all of the topics and left versus right, pricing is still the most unreliable diagnosis on what something is really worth especially when purchasing on eBay or Discogs.  I’ve seen $5 records go for $50, $100 records suddenly get sold for $25 and new pressings although on the secondary market for $20, there will always be that one jackass seller who has it listed for $80. What is the rhyme or reason behind the all over the place pricing that has become a plaque in the collecting world? Well you have the high priced seller who is fishing and hoping to find a sucker to spend an extra $50 on something when there are 5 others at $20. Then you have other sellers who will list a rare record with G+ condition for $300 when 6 months before a VG+ sold for $150. What kind of backwards ass way of thinking is that!? Can you guess which countries has the worst sellers or f*ck up pricing and list records like that?

Although I love being in the field finding records and having the direct connect to sellers who will just give me list with set values, eBay and now Discogs have become a way of life and it’s always about how you navigate through the shit or wait out the hype and bidding wars to later score a gem that you’ve been wanting for sometime. It’s all about knowing when to pull the trigger and when to look for something else to satisfy your spending habits. Just because a record sold for a high price in bidding war with two fat pocket idiots doesn’t necessarily mean that the next record is worth that price. The value of something is ultimately what someone is willing to pay for it and we all have gone a bit above asking price but if you look hard enough, you’ll eventually find that record again at a cheaper price.

“The massive price fluctuations are caused by inexperienced, impatient collectors. In collecting circles, records have two prices – one which is what the record is truly worth, and the second which is what someone is prepared to pay for it. To paraphrase Oscar Wilde, a fool isa person who knows the price of everything, yet the worth of nothing. On eBay (and now Discogs), there appear to be hundreds of collectors who know the price of nothing, and the worth of everything! They know how much a record is worth to them and bid accordingly.

Because of the erratic nature of eBay prices, many dealers are increasingly unhappy to sell records for their true market worth, because they are fed up with customers buying relatively common records and making a huge profit by selling them on eBay. This has led many dealers only auctioning records themselves to avoid getting their fingers (and wallets) burnt. It is getting more and more difficult to simply buy a record at a fair price.”

So with that being said and we’re back at present day, just this morning while scouring online for records, a repeated phrase popped into my head that has been said by every collector out there, “I can’t believe that record sold for that much last week”.