It’s been a minute since I’ve featured a fellow collector here at Nostalgia King that wasn’t record collector but still had a hefty collection of things that rivaled anything of the sort. The homie Mark Randolph or known on social media as @Blaxfilmfan is one of the most serious collectors that I know and digs from a completely different batch of goods than others in my circle. Mark is a historian of Black culture and is deep into the Blaxploitation genre and even deeper when it comes to collecting vintage Black Pulp paperback books. His collection spans from the earliest of years, to the most sought after and extremely rare gems that’s on the top of collectors lists.

I’ve been wanting to get Mark back onto the site after some years to introduce the readers to another side of collecting that they may or may not have been familiar with but it just shows that there’s always someone out there collecting some cool shit that others aren’t hipped to. Mark dug into his extensive collection to pick 5 gems with incredible cover art which help to make these highly sought after goods. Without wasting anytime, the good brother jumped in and here’s what he came up with.

From Chester Himes’ Coffin Ed and Gravedigger Jones through Donald Goines’ Kenyatta and beyond, the world of Black pulp fiction and its myriad of inhabitants have always existed to entertain, excite and inform. Read and passed around in poolrooms, barber shops and locker rooms from Harlem to Watts, these titillating and visceral tomes were an unflinching and brutal look into Black ‘hoods and backwoods: its detritus, perils, pitfalls and traps. A picture tells a thousand words and these lurid covers told them in spades.

Paralleling the timeline (and the decline) of movie poster art, Black pulp fiction paperback covers were initially beautifully illustrated and sourced from hand painted originals. Racist police, pimps, private eyes, bronze goddesses and the like were vividly portrayed and implored the reader to judge a book by its cover. Designed with drugstore spinners and tabletop tiered displays in mind, these covers had to be both enticing and informative.

While not the most recognizable titles in the canon, save Donald Goines aka Al C. Clark’s popular Kenyatta titles, these are some of the more recent additions to the archive. 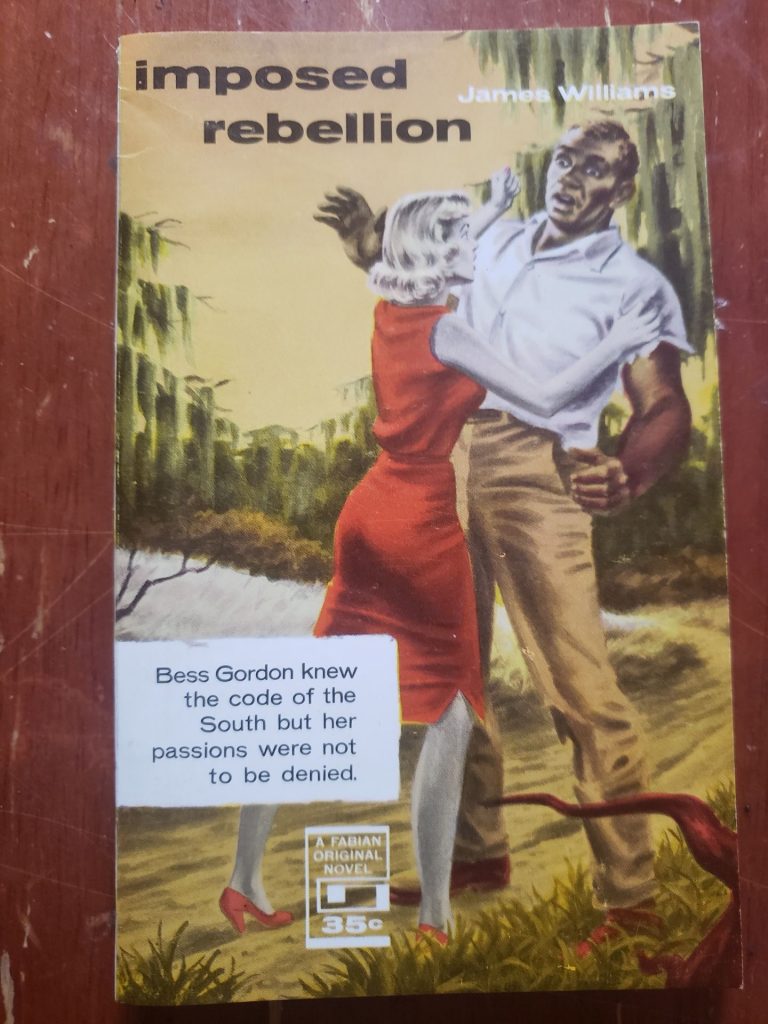 An interesting sub-category of Black pulp fiction are these tawdry tales of “love” and lust that were mostly set during the Antebellum period and Jim Crow. These midcentury stories featured steamy sagas and graphic scenes of miscegenation and forbidden desires marketed to whet the appetites of bored suburban housewives and randy traveling salesmen. Written by an African-American Marine stationed in Okinawa, Imposed Rebellion is the story of a love triangle between a Southern White woman and two Black brothers. Printed on inexpensive pulp paper, the sensational cover shows the woman as the sexual aggressor. James Williams writes, “The world caught fire; she was in the middle; she was getting burned but there was no pain.” 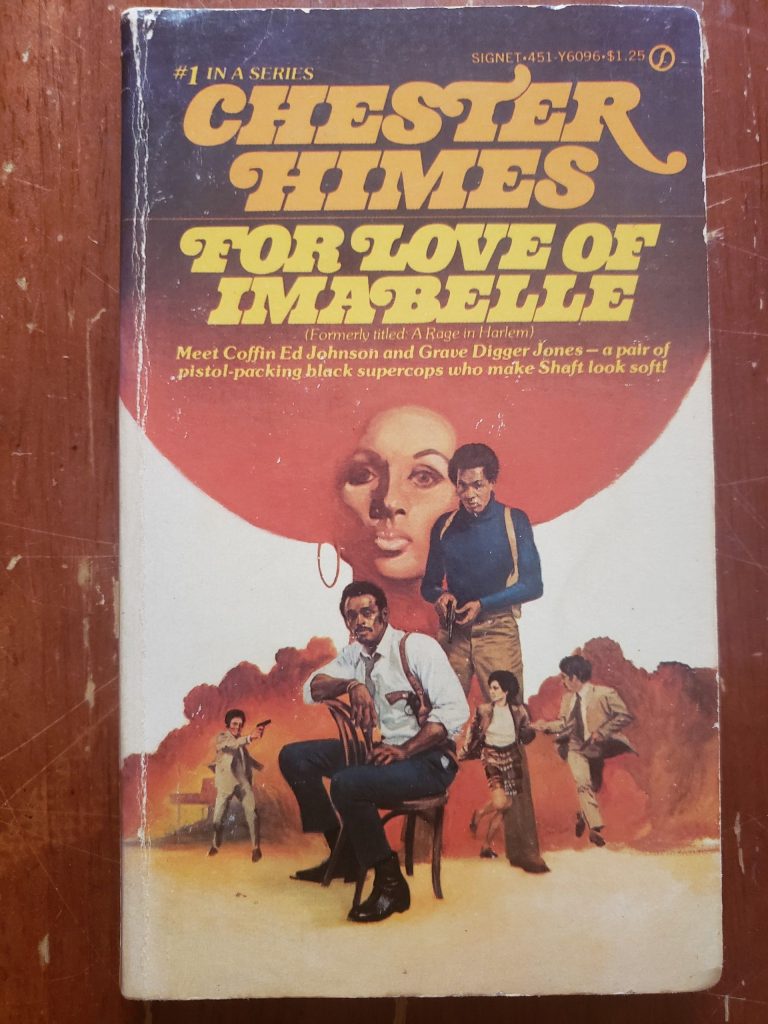 For The Love of Imabelle by Chester Himes (1974 edition)

Written in 1957, this Signet Classic first edition was published in 1974 and the title changed from A Rage in Harlem for its initial American publication. Although they didn’t get much burn here as they would in other Himes’ novels that would become his Harlem cycle, Coffin Ed and Gravedigger Jones are bold and resolute on the cover. Imabelle also looms large on the face of this edition as the action explodes in the background, culminating in an orange mushroom cloud which forms her glorious natural. This explosive motif was used to great effect on many Blaxploitation posters such as Superfly T.N.T., Cleopatra Jones and Death Force; save for the less literal interpretations. 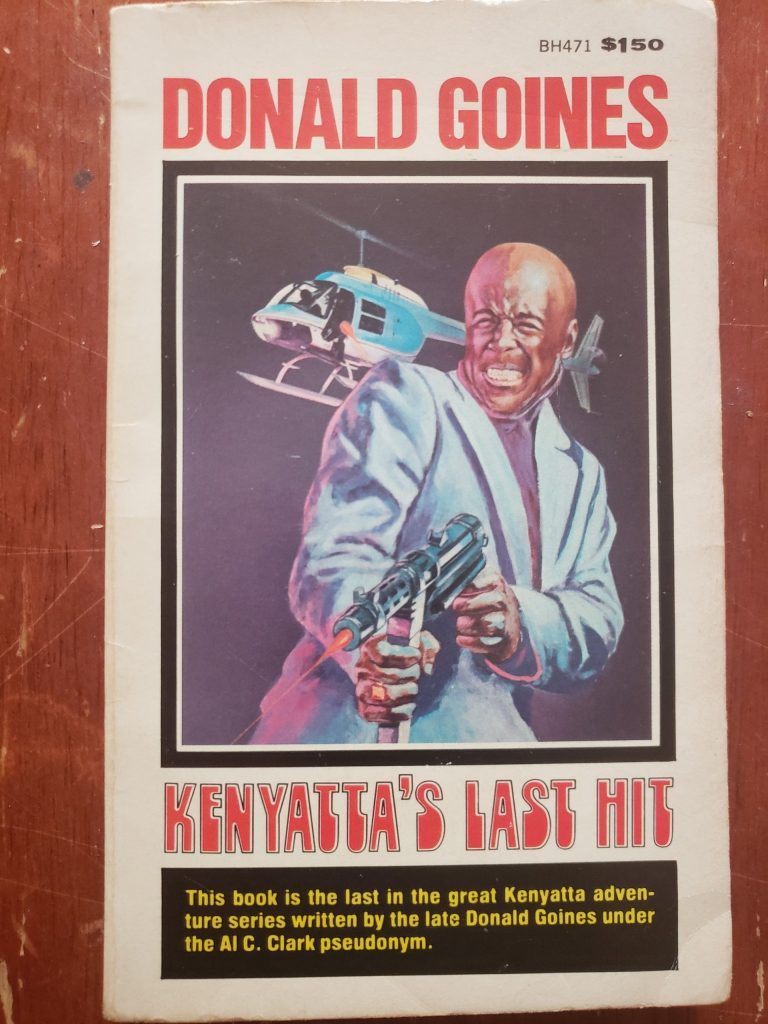 Tony Yamada-illustrator A couple of familiar Blaxploitation tropes are here: armed man in a helicopter and a grimacing cat brandishing a machine gun that’s probably aimed squarely at the Man and his minions. Also published under Goines’ pseudonym Al C. Clark, it will also be noted that the cover illustration was “inspired” by a machine gun wielding John Shaft in a scene from the series’ final film. 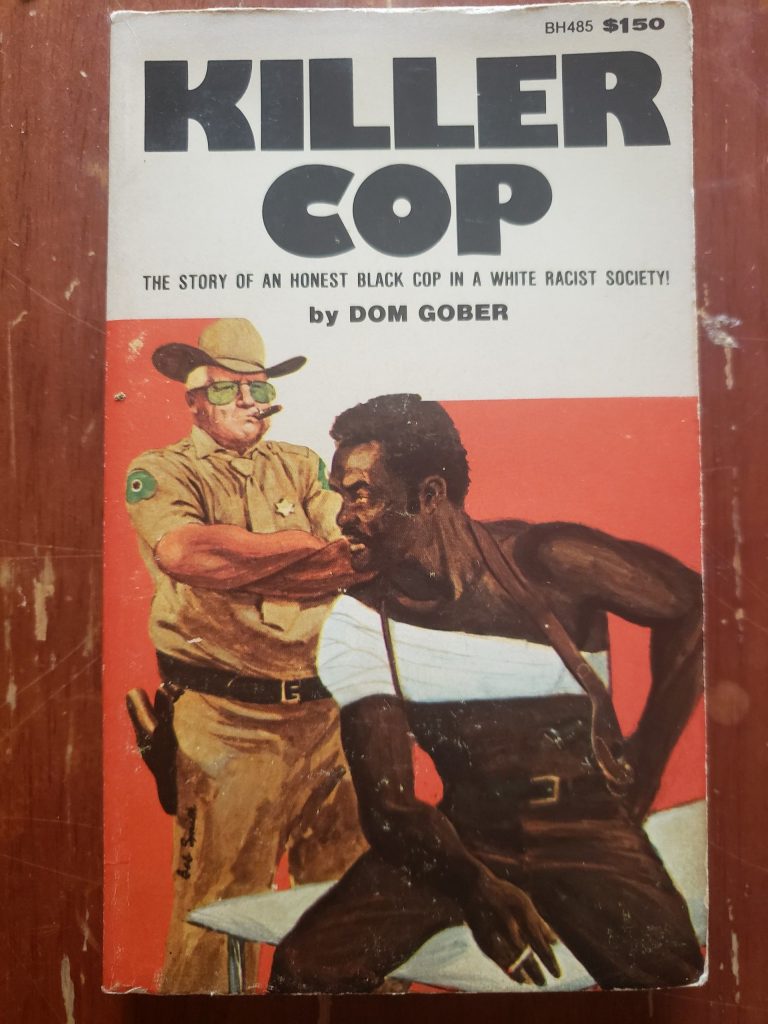 Very often, these pulps dealt with the Black experience in America and its trials and tribulations. In the paperbacks presented below, one lone brother goes up against the agents of a racist system and the bigoted Southern sheriff motif hammers that point home nicely. Channeling Rod Steiger’s Chief Gillespie in 1967’s In The Heat of The Night, our baleful sentry looms large near the margins both cautious and menacing. 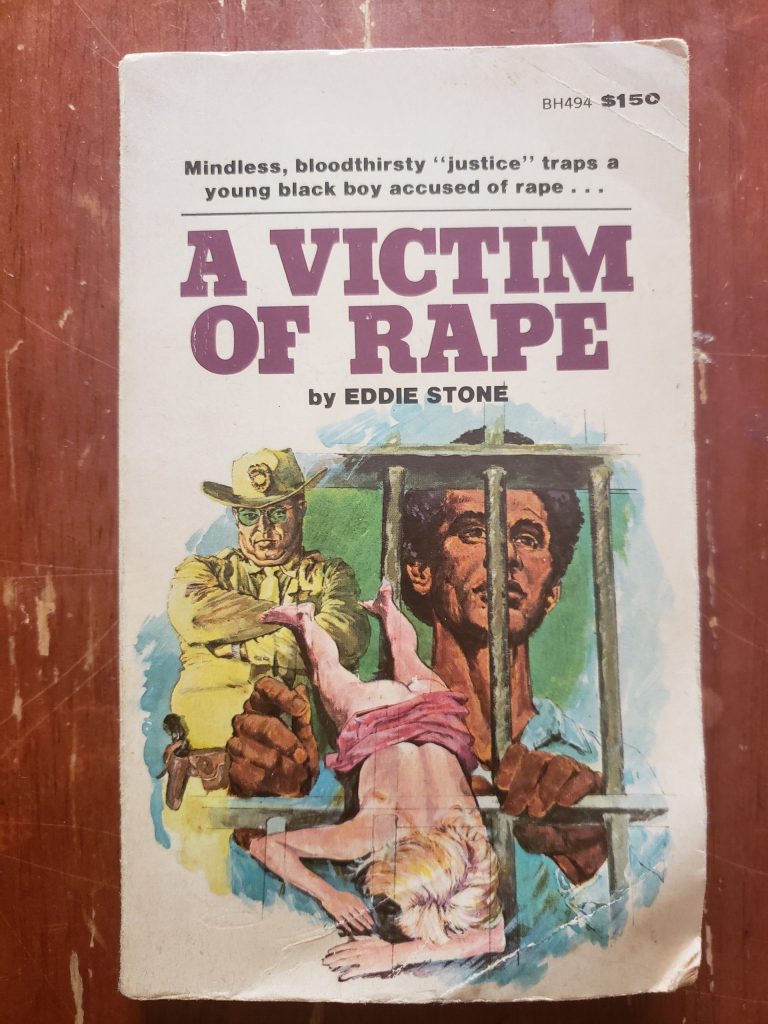