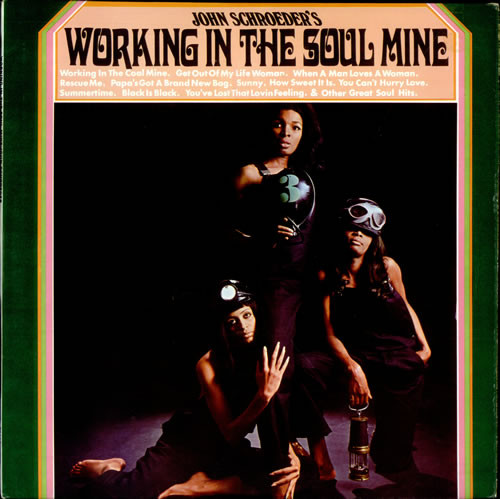 John Schroeder – Working In The Soul Mine

“Following a stint in the Royal Air Force, John Schroeder joined EMI and worked his way to the top, Minis to custom rollers and his own waste paper basket. In doing so, he enjoyed Top 5 hits as a writer, found success as a producers, artists and label manager, introduced Tamla Motown to the British mainstream, and masterminded Cymande, Britain’s most influential funk act. All this by the age of 40”

When it comes to digging for records, I always say that certain things will always pop up especially when it’s soul or jazz related and to date, most have shown up locally with a handful that haven’t. Out of all of the years that I’ve been active in the field, only a handful or records or artists have eluded me for an extended amount of time which eventually were secured. One of those artists is U.K. legend, John Schroeder and the album, “Working In The Soul Mine” (1966). Having been on the want list since the late 90’s, it wasn’t until the early 2000’s that I was able to grab a copy of the album but surprisingly, not local. After not listening to this record for some years, I recently rediscovered it in my own crates and gave it a spin.

Having never been pressed or released in the U.S., Working In The Soul Mine originally made it’s debut on the U.K.’s Piccadilly label with other pressings in Italy, Germany and Australia, with the closest region being Canada. Having been on 90’s diggers lists, mainly for the killer instrumental version of “Get Out of My Life Woman”, I have never seen it sitting in the bins or walls of shops here in the states which meant that I needed to take a flight overseas to see a copy which is exactly what happened back in the early 2000’s on tour over in London. The LP itself is a great listen with some amazing instrumental cover versions which includes James Brown’s “Papa Got A Brand New Bag” and “Summertime” (from Porgy & Bess) to name a few.

So why has this hit record that was once relatively common to find across the pond so difficult to find here in the states when other records of that nature aren’t? That’s a good question but as with most sought after records, they all eventually dry up and even on my last few trips to the London area, I hadn’t seen copies laying around. Once a record of conversation, it’s seemed to have fallen by the waist side or forgotten about when good records are concerned yet it’s a great one to have in the collection if you ever do come across it.

His follow up album, “The Dolly Catcher” is another gem to also add to your collection, this time blending more into the Jazz / Rock / Psychedelic lane. The swinging 60’s were a great time with some amazing music being made especially on the U.K. side of things which definitely makes me want to dive back into a few records that I haven’t listened to in years.