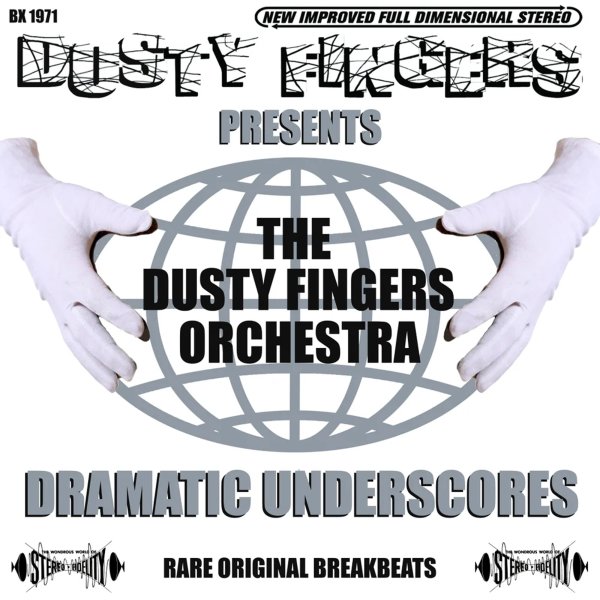 It should come as no surprise that being deep into Library and soundtracks and collecting those records for so many years would not only lead to releasing compilations but eventually recording original tracks inspired by those same records. Hence the first full length LP by the Dusty Fingers Orchestra simply titled “Dramatic Underscores” which obviously pulls inspiration from the genre. I interviewed Danny Dan The Beatman, creator of the Dusty Fingers series close to 15 years ago and one of the things that he mentioned was wanting to do his own project featuring and band. Well fast forward to the present and here it is.

“A really great project from Dusty Fingers – the beat-digging collective who turned countless producers and hip hop DJs onto the world of sound library grooves back in the 90s, thanks to their legendary collections! This album has the DF team almost returning the favor – using the title of “Dramatic Underscores”, which would frequently appear on vintage sound library albums from labels like KPM or DeWolfe – and serving up their own live creations, dedicated to reviving an older sound library vibe! Instrumentation varies from track to track – as it would on a classic set – and tracks are all short, funky in their many varied ways – with instrumentation that includes Hammond, Fender Rhodes, guitar, percussion, heavy drums, and lots of cool electronics and effects. Titles include “Man Hunt”, “Catfish Stew”, “The Fuzz”, “Blood Lust”, “The Boiler Room”, “The Assassin”, “Two Faces Of Gemini”, “The Evil That Men Do”, and “Tap The Drums”.”