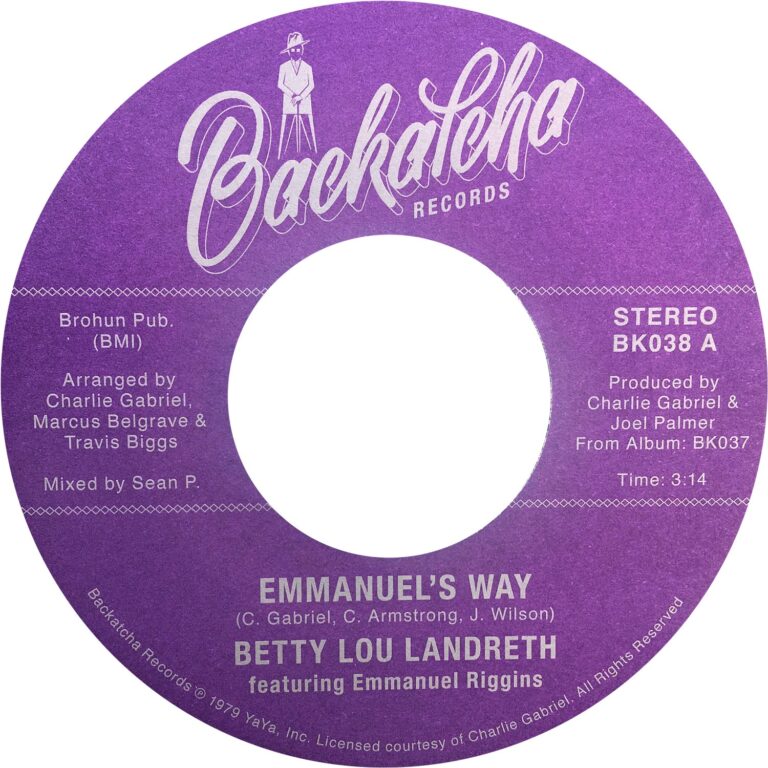 Backatcha Records delivering yet another essential slice on 45 that absolutely deserves your attention with the release of this Betty Lou Landreth double-sider. The second single from her now classic 1979 session features a recently discovered cover of Stevie Wonder’s hit, ’Shoo-Be-Doo-Be-Doo-Da-Day’, coupled with a stripped down instrumental version of ’I Can’t Stop’.

Wonder’s 1968 #1 ’Shoo-Be-Doo-Be-Doo-Da-Day’, is transformed into ‘country funk’ by a session swamped with New Orleans and Detroit jazz players spanning three generations. A defiant Betty Lou lets loose, leaving all the teen appeal of Wonder’s original behind, making a bold statement and singing her own song.

Despite epitomising the New Orleans style of musicianship displayed at the session, the song was omitted from the album’s original YaYa release and was discovered after revisiting the original multi-tracks. It was recorded at Super Disc on 8-Mile Road with an all-star line-up giving a little bit of everything. “It’s all there. This is the track where our heroine really loosens up, like the real Betty” says Sean P, who mixed the single and brought ’Shoo-Be-Doo-Be-Doo-Da-Day’ back to life.

In contrast, ’Emmanuel’s Way’ revisits ‘I Can’t Stop’, scaling down its big band sound to a small jazz-based combo. It features the late keyboardist Emmanuel Riggins on electric piano. A renowned session player and live musician, Riggins played on many sought-after albums with artists in and around his home state, including Billy Wooten (Wooden Glass), The Nineteenth Whole, and most notably, with Grant Green on various Blue Note sessions in the early 70s. For this aptly-titled single, it’s Riggins’ Rhodes playing that takes centre stage.