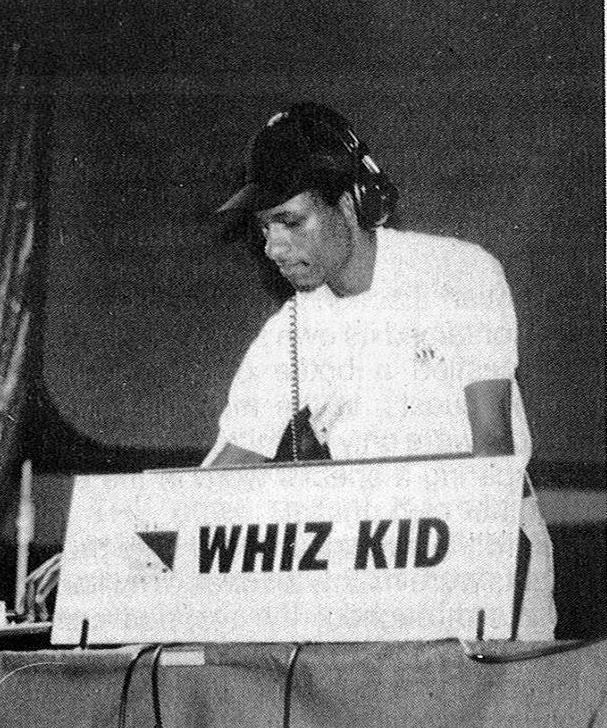 For years I’ve heard the name DJ Whiz Kid (Play That Beat Mr. DJ)weather it be on wax with his partner MC G.L.O.B.E or in passing conversation with older DJ’s discussing history and some of the under mentioned DJs and MC’s within the Hip Hop universe.  Then sometime around 1989 a cassette tape managed to make it’s way into my possession which featured Whiz Kid on the cut and I was totally blown away by how swift he was. The first tape I managed to score featured him at the 1982 ‘Battle of The DJ’s’ at the Music Seminar along with DJ’s Charlie Chase and Jazzy Jay and was hosted by Grand Master Caz.  Hearing this rough mix of early Hip Hop DJ’ing captured me at the present moment, the same way it did when I first started hearing DJ in the early 80s.  Whiz Kid was a god like Thor on the decks and it’s shocking that he doesn’t get the mention from many of his peers about his greatness. For many including myself, it was Grand Master Flash that inspired us to be DJs and rightly so, he was FLASH! But after hearing Whiz Kid, I instantly knew there was something special about him and rightly so, he after all did win 3 “Best DJ” awards at the New Music Seminar.

“Originally Harold (Whiz Kid) didn’t even want to dj…he just did it in the house. Ironically me (MC Lucky) and his brother Mike (Mike G) had another dj who is the brother of the late Pumpkin. We finally convinced Harold G (as he was known) to join us, we dropped the other dj, and became DJ Whiz Kid and the High Powered MCs. I lived in Twin Parks (183 & Prospect) so I would bring Harold and Mike around and we started playing music in the projects. Later we added Cisco who used to hang out with Charlie Chase and we became the High Powered 3 MCs. After doing a lot of block stuff we started doing the T-Connection with Herc and that’s when Whiz Kid really blew up.” – Asim (formally MC Lucky) Source: The Old School Hip Hop Forum

Last week I interviewed a gentlemen by the name of Johnnyray Gasca who is known as the person who created the market and introduced a generation of Kung Fu film lovers to Shaw Brothers flicks bootlegged to VHS.  It was because of Mr. Gasca that the likes of The Rza, Quentin Tarantino, Samuel Jackson, New Yorkers and Hip Hop kids could get their fix and own these flicks on VHS from the mid 80s well into the 90s. In the interview we discuss a chance meeting between Johnnyray Gasca and Whiz Kid (who was a big collector of Kung Fu flicks) while in NY’s Chinatown digging for VHS tapes. The two bonded over these films and Hip Hop which created a strong friendship until the day Whiz Kid (R.I.P) passed away.

While connecting more dots within the Kung Fu and Hip Hop genres, I later find that Whiz Kid was responsible to the meeting of two more Hip Hop gents, DJ / Producer Paul Nice and Seattle’s Big Chan. Paul Nice at the time was placing ads in the back of the Source Magazine selling these films on VHS.

“Both Channing and myself knew Whiz as Kung Fu head first. He was so humble, he never let on that he was also my DJ idol Whiz Kid. “Play That Beat” was my shit going into 9th grade! Someone else in the NY trading circle put me up on his true identity. What’s really funny is that Whiz was the one who really introduced me to Chan! He might remember better but I think Chan mailed me for one of my catalogs when I was selling flicks out of The Source. At one point Whiz was like, “you need to get up with Channing in Seattle – his laser disc collection is SERIOUS !” – Paul Nice

It’s obvious that Whiz Kid passed away way too soon and that his skills on the decks were top notch and after hearing rumor that he is the one who programmed Paul Hardcastle’s “Rain Forest”, it makes one wonder just how far he could’ve gone in the music world.

“All the time when I was growing up I wanted to battle Grandmaster Flash, you know DJ versus DJ. But now I’m not so hot on the idea. You see, I think the money has got to him a little. But me, I’ve been holding back on what I show. I’ve still got lots of new things that I’m doing” – Whiz Kid source: Ann Arbor News July 23, 1983