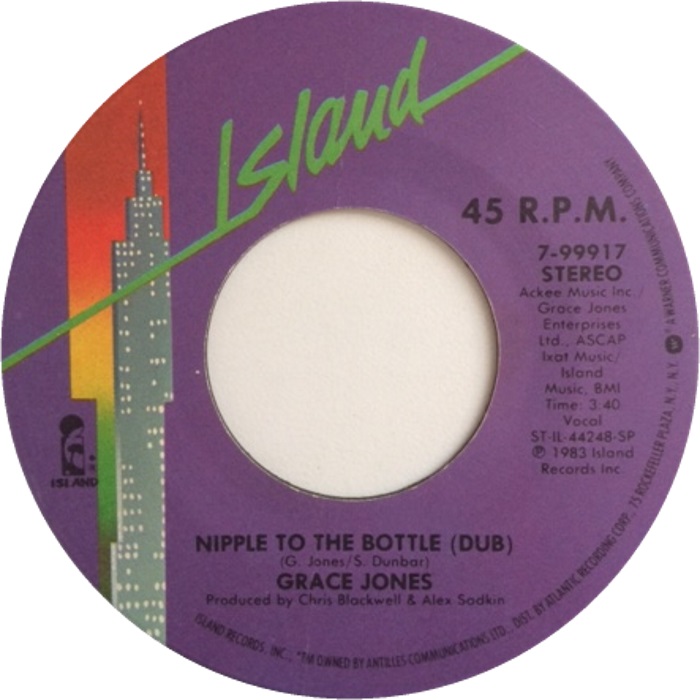 Grace Jones – Nipple To The Bottle

We’re living in an era where so many artists try to push their images so far left which most times comes off as simply fake for a generation thats impressed by fluff. It’s almost like who has the best PR team to create antics to capitalize on the current trends  to sell records but there’s always been one icon who was the originator, has done it better than anyone else, pushed sexy to the furthest reaches and actually was that person even when the spotlights went off, Grace Jones. Today we celebrate the Jamaican born singer, songwriter, supermodel, record producer, and actress’ birthday who turned 69 by taking a look back at one of her classic records featuring an always favorite old school break, “Nipple To The Bottle”.

1982’s Nipple To The Bottle was one of those breaks that I heard early on played on the radio but it wasn’t until I caught DJ’s rocking doubles that I really understood just how dope of a record it was and still is an often played tune within my sets. The great thing about this release which is available on 12″ and 7″ is that it’s a perfect double sider which features “My Jamaican Guy” on the flip which was made famous on LL Cool J’s “Doin It”. A classic on either format and one that should be in any collection.

Born in Jamaica, at age 13 she moved with her siblings to their parents’ home in Syracuse, New York. Jones began her modelling career in New York state, then in Paris, working for fashion houses such as Yves St. Laurent and Kenzo, and appearing on the covers of Elle and Vogue. She worked with photographers such as Helmut Newton, Guy Bourdin, and Hans Feurer, and became known for her distinctive androgynous appearance and bold features.

In 1977 Jones secured a record deal with Island Records, initially becoming a star of New York City’s Studio 54-centered disco scene. In the early 1980s she moved toward a new wave style that drew on reggae, funk, post-punk, and pop music, frequently collaborating with both the graphic designer Jean-Paul Goude and the musical duo Sly & Robbie. Her most popular albums include Warm Leatherette (1980), Nightclubbing (1981), and Slave to the Rhythm (1985). She scored Top 40 entries on the UK Singles Chart with “Pull Up to the Bumper”, “I’ve Seen That Face Before”, “Private Life”, and “Slave to the Rhythm”. In 1982, she released the music video collection A One Man Show, directed by Goude.