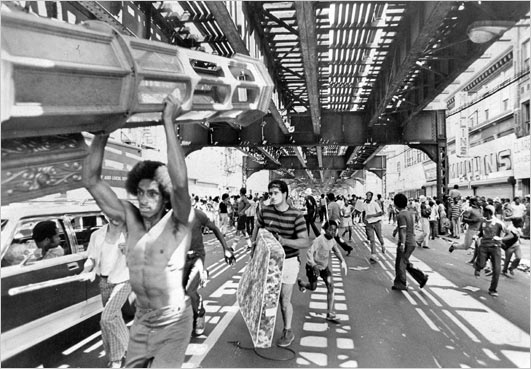 Blackout 1977 – The Year The Lights Went Out

Today marks the 40th anniversary of the New York blackout of 1977 where electrical currents that supplied the city had blown due to lightning strikes causing mass hysteria, looting and of course the rise of more DJs within the scene.  The only neighborhoods in the city that were not affected were in southern Queens; neighborhoods of the Rockaways, which were part of the Long Island Lighting Company system; and the Pratt Institute campus in Brooklyn which operated its own historic power generator.

How it all began:

The events leading up to the blackout began at 8:37 p.m. EDT on Wednesday, July 13 with a lightning strike at Buchanan South, a substation on the Hudson River, tripping two circuit breakers in Buchanan, New York. The Buchanan South substation converted the 345,000 volts of electricity from Indian Point to lower voltage for commercial use. A loose locking nut combined with a slow-acting upgrade cycle prevented the breaker from reclosing and allowing power to flow again.

A second lightning strike caused the loss of two 345 kV transmission lines, subsequent reclose of only one of the lines, and the loss of power from a 900MW nuclear plant at Indian Point. As a result of the strikes, two other major transmission lines became loaded over their normal limits. Per procedure, Consolidated Edison, the power provider for New York City and some of Westchester County, tried to start fast-start generation at 8:45 p.m. EDT; however, no one was manning the station, and the remote start failed.

At 8:55 p.m. EDT, there was another lightning strike at the Sprain Brook substation in Yonkers, which took out two additional critical transmission lines. As before, only one of the lines was automatically returned to service. This outage of lines from the substation caused the remaining lines to exceed the long-term operating limits of their capacity. After this last failure, Con Edison had to manually reduce the loading on another local generator at their East River facility, due to problems at the plant. This made an already dire situation even worse.

At 9:14 p.m. EDT, over 30 minutes from the initial event, New York Power Pool Operators in Guilderland called for Con Edison operators to “shed load.” In response, Con Ed operators initiated first a 5% system-wide voltage reduction and then an 8% reduction. These steps had to be completed sequentially and took many minutes. These steps were done in accordance with Con Edison’s use of the words “shed load” while the Power Pool operators had in mind opening feeders to immediately drop about 1500 MW of load, not reduce voltage to reduce load a few hundred MW.

At 9:19 p.m. EDT the final major interconnection to Upstate New York at Leeds substation tripped due to thermal overload which caused the 345kV conductors to sag excessively into an unidentified object. This trip caused the 138 kV links with Long Island to overload, and a major interconnection with PSEG in New Jersey began to load even higher than previously reported.

At 9:22 p.m. EDT, Long Island Lighting Company opened its 345 kV interconnection to Con Edison to reduce power that was flowing through its system and overloading 138 kV submarine cables between Long Island and Connecticut. While Long Island operators were securing permission from the Power Pool operators to open their 345 kV tie to New York City, phase shifters between New York City and New Jersey were being adjusted to correct heavy flows, and this reduced the loading on the 115 kV cables. The Long Island operators did not notice the drop in 115 kV cable loadings and went ahead with opening their 345 kV tie to New York City.

At 9:24 p.m. EDT, the Con Edison operator tried and failed to manually shed load by dropping customers. Five minutes later, at 9:29 p.m. EDT, the Goethals-Linden 230 kV interconnection with New Jersey tripped, and the Con Edison system automatically began to isolate itself from the outside world through the action of protective devices that remove overloaded lines, transformers, and cables from service.

Con Ed could not generate enough power within the city, and the three power lines that supplemented the city’s power were overtaxed. Just after 9:27 p.m. EDT, the biggest generator in New York City, Ravenswood 3 (also known as “Big Allis”), shut down and with it went all of New York City.[2]

Power was not fully restored until late the following day. Among the outcomes of the blackout were detailed restoration procedures that are well documented and used in operator training to reduce restoration time.

With most things newsworthy comes movies and films based on it and it didn’t take long before someone came up with a script to make it all happen (with a twist of course). The film Blackout made it’s debut in theaters in 1978.