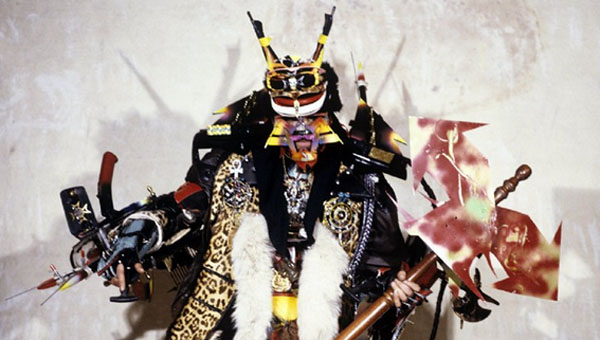 New art exhibition and auction featuring the works of legendary graffiti / street artists / visual artist Rammellzee hosted by Sotheby’s will take place September 22nd – 29th.  Known by many yet still under the radar of most, this preview of rediscovering Rammellzee is something thats long overdue.

Rammellzee’s graffiti and art work are based on his theory of Gothic Futurism, which describes the battle between letters and their symbolic warfare against any standardizations enforced by the rules of the alphabet. His treatise, Ionic treatise Gothic Futurism assassin knowledges of the remanipulated square point’s one to 720° to 1440°, details an anarchic plan by which to revise the role and deployment of language in society.

Rammellzee performed in self-designed masks and costumes of different characters which represented the “mathematical equation” that is Rammellzee. On the basis of his Gothic Futurism approach, he described his artistic work as the logical extension into a new phase which he calls Ikonoklast Panzerism. This artistic work has been shown in art galleries throughout the US and Europe. His Letter Racers, and other Noise includes artistic works by individuals mostly identified with their musical contributions.