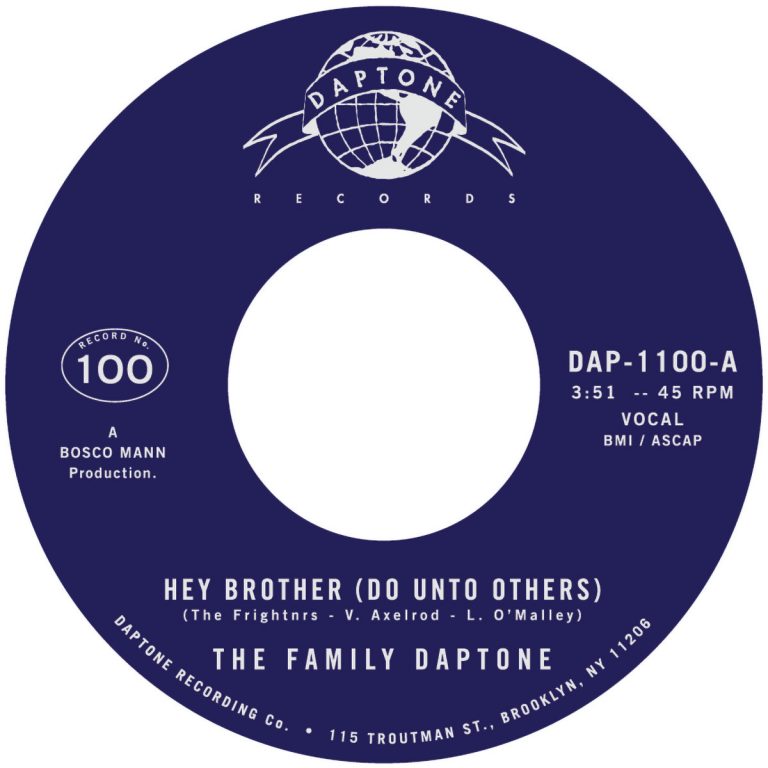 The Family Daptone – Hey Brother (Do Unto Others)

Reaching the 100 mark of releases on a label isn’t something to sneeze at and shows that you’ve put in plenty of work over the years with consistency and quality being a priority. One label thats obviously been a workhorse delivering a slew of 45’s since the very beginning and helping to build the careers of some amazing artists is Daptone Records who are celebrating the 100th release in a big way. With the latest drop, the label brings a whole new meaning to the term “we’re getting the band back together” because the new release is truly a family affair and in this case, The Family Daptone takes top billing. Featuring a who’s who cast of vocalists who have recorded for the label including Sharon Jones, Charles Bradley, Lee Fields, Naomi Shelton, James Hunter, San & Starr, Dan Klein and Duke Amayo. “Hey Brother (Do Unto Others) is an uplifting soulful gem that’s perfectly orchestrated and an overall masterpiece.

The B-side is yet another monumental moment for the label and features “Soul Fugue” by The 100 Knights Orchestra which is comprised of every horn player that has every horn player who has ever blown on a Daptone release. It’s a rarity to have this much talent in the studio at once but it’s even more rare to record on a day that only comes around once every four years on a leap year which usually falls on February 29th. There has to be some sort of magic that comes out of the studio with that type of chemistry going on.  The 100 Knights Orchestra features the likes of The Dap Kings, The Budos Band, Menahan Street Band, Antibalas, The Extraordinaries, Daktaris and The Soul Providers.

Without a doubt, this is the way to celebrate a 100th release in a major way for a label that has been championing funk and soul sounds since the very inception. Available now on 7″ via the Daptone Records webstore.