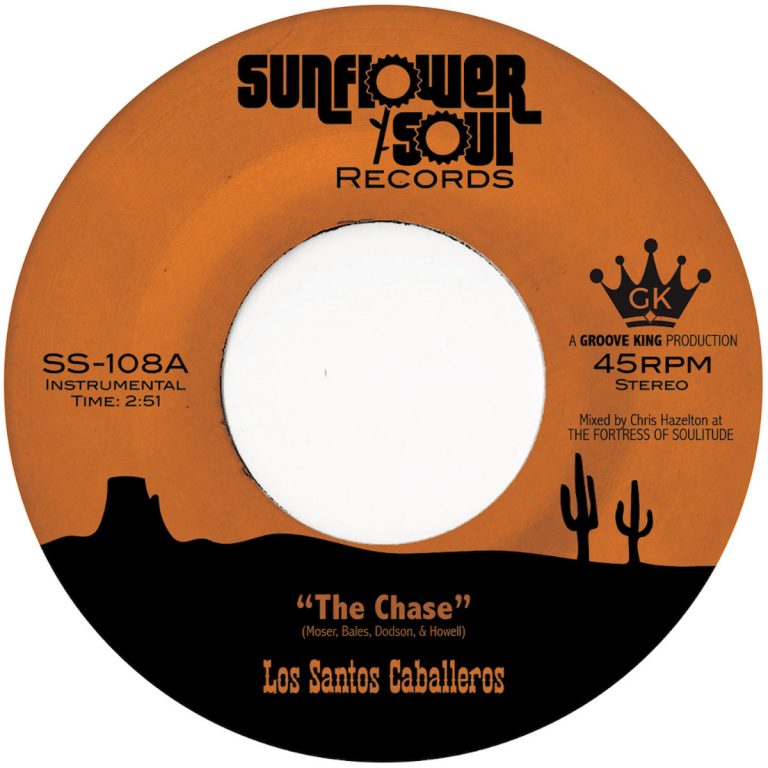 Whenever I hear tunes that remotely sound like they could come from some sort of cinematic soundtrack weather it be exploitation, Blaxploitation, Sci-Fi or Porn yet I know it’s not from something that I’ve ever seen or heard, I instantly go into Quentin Tarantino mode with my ears raised like secret spy antennas. Over the years, there have been film with amazing scores yet were never pressed to vinyl and on the flip side of the coin, there have been “soundtracks” created for fictional or mystery films that may or may not have existed depending on who you talk to.  One of my favorite genres of film is without a doubt, Italian Spaghetti Westerns and their usage of background drops and scores so when something like the new Los Santos Caballeros 7″ lands in the post via horse and carriage, I’m intrigued.

“The Chase” b/w “The Walk” is exactly what I expected to hear after seeing the label design and reading the titles. Los Santos Caballeros is a strictly studio project from the Groove King production team of Branden Moser and Cole Bales (both members of Instant Karma! and The Freedom Affair). Both tracks part of a larger soundtrack to a fictional film entitled “Chico Is The Man”, which will be released in it’s entirety at a later date (or maybe like fabled films, not at all). Regardless, we’ve got the drop on the first single from the project for you to ride the dusty trails to!