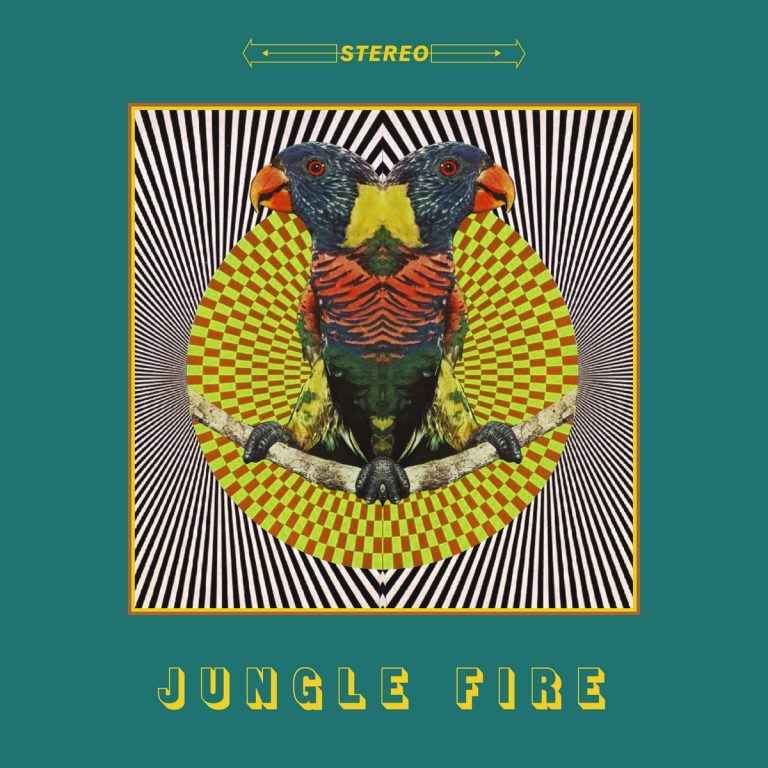 As a good music lover and reviewer, it’s often times hard to critique or tell you something new about bands that we’ve been championing since day especially when those bands do what they do so well. But that could often times be the gift as well as the curse. We love artists who stick to what they do which guarantees us a great listen but we love those who surprise us with something slightly different yet noticeably their own take on a sound. Jungle Fire is one of those unique bands that we’re excited about when theres a new 45 or LP to drop because we know that we can easily work it in the mix of our sets and not miss a beat. The new self titled LP gives us more of the same but on a deeper and darker level than before which shows the natural growth in the band who has coined the phrase, “Tropifunk”.

“Jungle Fire” features 10 serious cuts incorporating rhythms from a wide variety of African Diaspora sources. Funky, psychedelic, drum heavy, blaring horns and a tight rhythm section is what makes them who they are and you’re in for a musical journey unlike anything they’ve previously done.

“The album opens with “Quémalo”, a fuzzed out and psychedelic Pilón (the Cuban musical genre, not the coffee brand) inspired ode to the great Cuban Funk master himself, Juan Pablo Torres. As the name implies, it is a burner meant to clear the way for new and funky forms of musical expression.”

“‘Biri Biri’, which in part takes its meaning from the Yorubá phrase meaning “that which spreads”, is a happy union between a bouncy Afrobeat-esque rhythm with synth and dub flavoring that has proven to be a stimulating force in the dance floor for the band’s most recent performances in California.”

“The Afro Disco and Psych Rock sounds of “Atómico” are a nod to the dance floor burners of Jungle Fire’s debut LP and have proven to be a great set closer and/or encore during the band’s most recent club performances.”

“The album’s closing track “Consider This” pays homage to Rod Serling and came about during a musical exploration inspired by the copious amounts of DVDs labeled “Consider This” circulating the City of Angels at the end of 2018 while the band was immersed in its first group venture into film scoring. It is a likely approximation to what would happen if they would ever score an episode of the legendary TV show, Twilight Zone.”