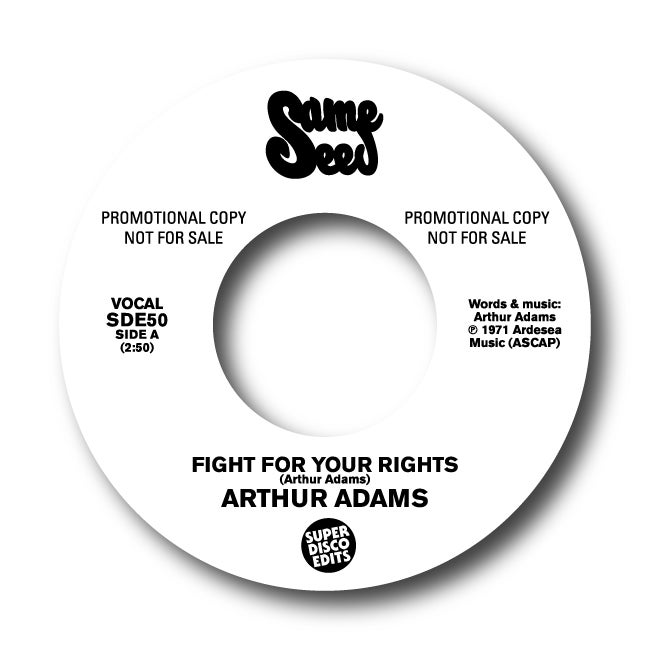 Arthur Adams – Fight For Your Rights

Since the very beginning, Super Disco Edits has always done things in a way that’s separated itself from other labels by giving fans something just a little bit deeper than the norm. Always striving to unearth gems that have been left on reels in dusty studios, the label has reached a milestone in what seems like short time with their 50th release. That’s right, the big 5-0 and for the occasion they dive into the Arthur Adams archives for a solid double-sider of dance floor goodness.

“Hitting hard like a hammer, we have unearthed the fist pumping fight for you rights power SWAM 45 like no other. Sung and performed by legendary soul and blues artist Arthur Adams. The session was recorded sometime between 1969 & 1971 and fuelled by discontent amongst young and old black Americans for a consistent lack of equal rights and suppression across the U.S.A. Backing Arthur Adams on the track were none other than some of The Crusaders. Joe Sample (Keyboards) Stix Hooper (Drums) Wilton Fleder (Bass) and Al Versova (Guitar). Somehow this studio reel was sent to a West Coast a&r person for a view to public release. We are unsure why the tracks got over looked, but we are happy to have them for our 50th release. On the A-side, “Fight for you rights” could stand toe to toe with Bobby Bland, Joe Tex and Sebastian Williams and many other hard hitting artists who have been revered on the soul scene for the past 50 years. It hits hard with its message but musically punches you across the dancefloor with its driving drums and guitar licks. Mastered from the original reels we made sure each element was on point for that 45 vinyl release. Flip it over and the B-side features “Sure is Funky Down Here” is exactly what it says on the tin! A fast paced down home style funk instumental, but what we love is it lets rip half way through with a ferocious drum break and bassline breakdown. So in keeping with its 1971 production.