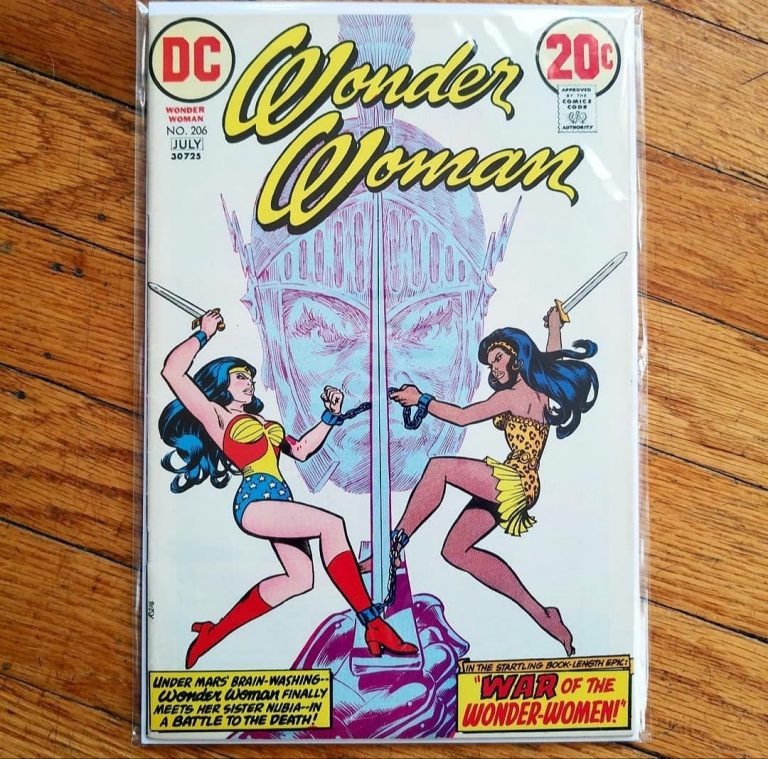 Did you know that Wonder Woman has a Black twin sister named Nubia? If not, then don’t feel left out, most people don’t unless of course you were reading DC Comics when she was introduced 47 years ago. Why am I brining this topic up now you ask? Well over the years, Nubia has made only a handful of appearances in the comics but DC Comics decided that it was time to do a graphic novel based around here titled Nubia: Real One. Both Wonder Woman and Nubia were born at the same time, one was created using a lighter shade of clay and the other a darker shade.

In Wonder Woman (vol. 1) #204, (January 1973), Diana (Wonder Woman) has her memories restored by the Amazons and is soon confronted by an armored female warrior who challenges her to single combat. The two initially wrestle, then face each other with swords. Diana and the intruder seem evenly matched until the intruder knocks the sword from Diana’s hands, but then hesitates to kill her. The dark-skinned stranger introduces herself as Nubia, the one true Wonder Woman, and tells Diana that they will meet again someday to decide which of them has the right to the title. Diana’s mother, Queen Hippolyta, secretly believes she recognizes Nubia, who returns to her own Floating Island.

A short Nubia story in Wonder Woman #205 picks up with her departure from Paradise Island, including a short conversation and an embrace from Hippolyta. Back on her mist-concealed Floating Island, Nubia rules a community of all men. Upon her return, two men claim the right to fight for her, citing the “law of the Floating Island” or “Mars’ law of conquest.” Declaring “No man will ever own Nubia!” she fights one of the men herself, defeating him but letting him live. She says, “A woman doesn’t destroy life, she cherishes it!”

In Wonder Woman #206, Hippolyta flashes back to the truth, a revised version of Wonder Woman’s origin story: Hippolyta had formed two babies from clay, one dark and one light. They are brought to life by the gods, but Mars the god of war abducts baby Nubia, whom Hippolyta never sees again. Nubia is raised by Mars as his weapon of destruction against the Amazons. Mars and Nubia launch an attack on Paradise Island from their so-called “Slaughter Island.” Coming to assist, Diana recognizes Mars’ ring and removes it from Nubia’s hand, breaking the god’s mind control over Nubia. She and Diana oppose Mars, who flees, and Nubia leaves to lead her warriors “into ways of peace.” Hippolyta reveals Nubia’s origin to Diana.