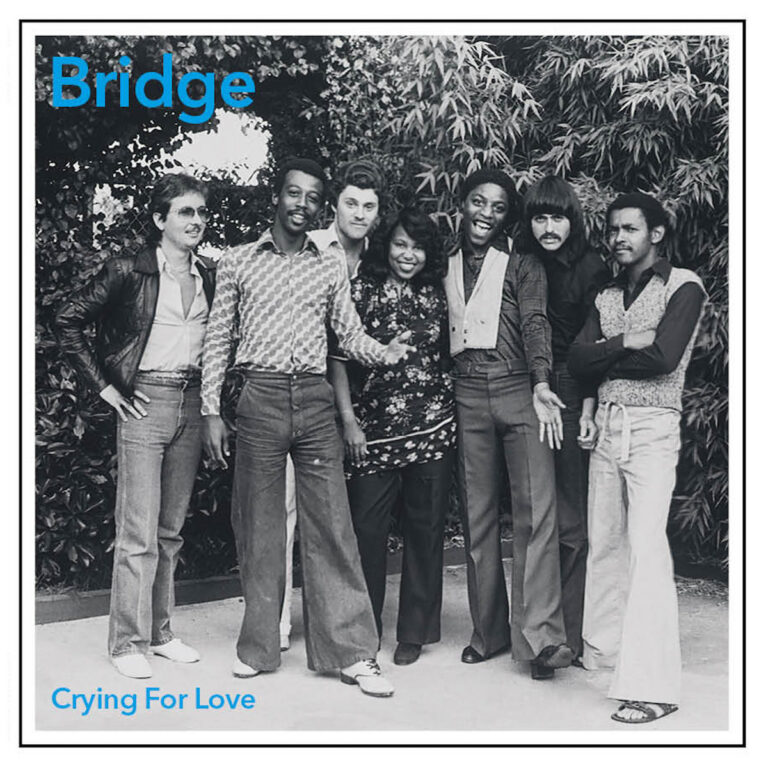 What more can be said about 2020 as it comes to a close that we haven’t already reinforced already with the amazing music that’s been coming out during the pandemic? Well for one, High Jazz Records has been on an incredible roll this year with a solid outing of sought after rare and in demand reissued LPs that should be essential in every crate. And just before the ball drops to bring in the new year, they’re closing things out with an absolute magical gem that we didn’t know we needed from Bridge.

Considering the quality of the vocalists, instrumentalists, and songwriters who comprised Bridge, the Oakland/Berkeley, California septet should have been big. Dissension within the group and conflicts with producers doomed the band, which spent four weeks in Boulder, Colorado in 1981 cutting an album for Ilene Berns’ CBS distributed Bang label that never saw the light of day. Now, after nearly 20 years in mothballs, comes a collection of the demos that helped the group land the Bang deal. These selections reveal a sophisticated fusion of soul, jazz, rock, and latin elements that placed Bridge well ahead of its time.

Bridge evolved from Vitamin E, a short-lived band that cut a terrific album for Buddha in 1977 titled Sharing. Produced by Norman Connors, the disc featured the male/female vocal frontline of David Gardner and Lady Bianca, with Oakland soul veteran Freddie Hughes (best known for his 1968 hit “Send My Baby Back ») contributing his multi octave pipes to the title track.
Leader and drummer Paul Tillman Smith supplied the songs. Born in Oakland in 1947, Smith has an impressive list of sideman credits, including work with Jimmy McCracklin, Lightnin’ Hopkins, Sonny Simmons, and Michael White. Although he considers himself primarily a jazz drummer, he began writing pop songs in the early 70’s as another creative outlet. Smith’s tunes have been recorded by such artists as Cold Blood, Norman Connors, Pharaoh Sanders, Phyllis Hyman, Jean Carne and Webster Lewis.

When Sharing failed to have much commercial impact, the group began falling apart. Gardner quickly lost interest, and Bianca left to work with Sly Stone, then Frank Zappa. Finding a replacement for Gardner was easy. Smith turned to Freddie Hughes’ 18 year old son Derick, whose previous experience had been confined largely to church but whose vocal virtuosity rivaled that of his father. Locating a female vocalist was harder. Smith had been hearing about Debravon Lewis for a couple of years but had been unable to locate her. « Everybody was telling me she could sing, so I knew she was the one”, Smith recalls. « I hadn’t even heard her. I take musicians’ words for things. When I finally heard her, I said, ‘Yeah, she’s badd, but how does she sound on tape?” Lewis turned out to be, in Smith’s estimation, “One of the finest recording vocalists”.

The Bang deal proved to be Bridge’s undoing. Arguments over money broke out on the flight to Boulder. After their arrival, Smith and Bendich discovered that they weren’t going to get to produce the album themselves. Engineer Dwayne Scott and Malaco studio drummer turned, Nashville producer James Stroud had been tired for the task. “They didn’t make any real effort to accommodate us” Bendich says of the producers. “It was like, we know how to make records, and you guys sit back and take notes”. Before the project was completed, most members of Bridge had been sent back to Oakland. The producers brought in keyboardist Barry Beckett, guitarist Jimmy Johnson and bassist David Hood in from Muscle Shoals to complete the project, Stroud played drums himself.

Although Bang had spent $65,000 on the Bridge album, it was never released. The band soon collapsed, though Rosie Gaines filled in for Lewis briefly. Lewis changed her name to Fizzy Qwick and recorded an album with a group called Tiggi Clay for Motown’s Morocco subsidiary in 1984 and an album of her own for Motown proper two years later before abandoning music. Derick Hughes went on to sign with both Motown and Prince’s NPG label, but nothing was ever released. Today he spends much of his time with various touring gospel musical theatre productions. “Derick was amazing, like a young Donny Hathaway, so spiritual, so pure!” Bendich says of Hughes’ performances on disc, “And Debra had a way of letting her vulnerability come through. When we were producing her in the studio, you felt everything that she was singing. There wasn’t any faking, and the tone that she had, Debra would make us cry!”.

Now, at long last, the world can hear Bridge the way Smith and Bendich intended in the first place.