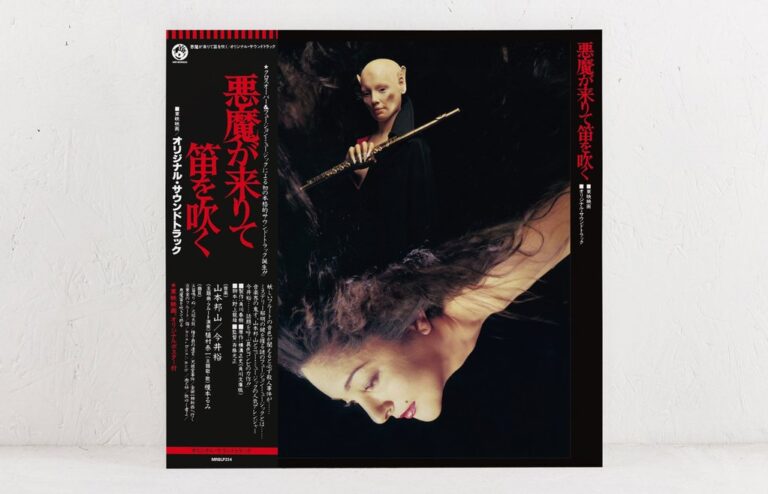 Prior to 2012 I was not familiar with this film nor soundtrack but after a tour and trip to Japan I was hipped to Hozan Yamamoto & Yu Imai’s soundtrack masterpiece “Akuma Ga Kitarite Fue Wo Fuku” as well as the film that it was connected. I instantly bought it after hearing it and fell in love with the overall soundscape that the album presented. Not having listen the album in quite sometime, I was reminded of it’s beauty after receiving the upcoming reissue presented by Mr Bongo and a much needed one at that. Still rather under the radar by most, but with this essential reissue, there’s surely to be newfound fans taking note.

A legend of Japanese jazz, he is rightly regarded as a true master and was recognised as a “living national treasure” by the Japanese government in 2002. Over five decades he pushed the genre into new directions, absorbing fusion, funk, spiritual jazz and many other sounds, resulting in a discography studded with gems of rare beauty.

Though not translating perfectly into English ‘Akuma Ga Kitarite Fue Wo Fuku’, (kitarite has not been a modern expression in Japanese) roughly means ‘The Devil Comes Playing The Flute’ / ‘The Devil Is Coming While Blowing The Whistle’ or ‘Devils Flute’. It is the original soundtrack to Kôsei Saitô’s 1979 mystery and suspense movie, ‘Devil’s Flute’. The film is based on a story by the famous author, Seishi Yokomizo, and is centred around a much-loved fictional Japanese detective, Kosuke Kindaichi. A Japanese Sherlock Holmes that has been popular for generations.

Hozan Yamamoto was invited to compose the soundtrack directly by the producer of the film, Haruki Kadokawa. Mr Kadokawa also hired keyboard player and producer Yu Imai as an assistant producer on the project, resulting in a stunning cosmic, breaks and beats-laden, funk, disco soundtrack extravaganza.

Available for pre-order at https://us.mrbongo.com/products/akuma-ga-kitarite-fuw-wo-fuku-vinyl-lp-cd