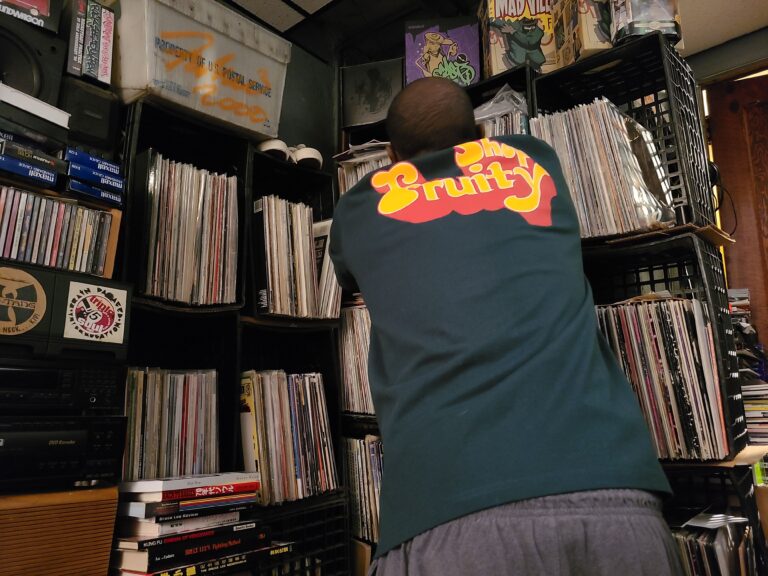 What It Is, What’s Next With Skeme Richards

It’s been a minute since I’ve caught up with the Nostalgia King who isn’t the easiest person to track down and lock in for an in person meeting because he loves his alone time that much but on a rather hot and humid day, he invited me over to his lair to catch up. Located somewhere close to but not necessarily the suburbs, he greets me at the door and we make our way to the shaded back deck where he has a pitcher of homemade iced tea waiting. He jokingly asks if I remember Country Time lemonade and says that would’ve usually been the go to drink of choice had this been the 1980’s and preferred it over Kool-Aid.

After a brief moment of catching up, talking about the state of the world, things that are making a comeback and things that should be forever banished from the face of the earth, we descend  down into the lab as I begin asking about his most recent projects and releases, what he’s feeling at the moment and of course what he’s not. It was of course a great time talking with Skeme as always.

Mossimo Chao – So let’s dive right in and talk about your latest 45 release with RBMBoots which sold out in what, 48hrs?

Skeme – Yeah, it’s a pleasure to work with RBMBoots on these 45’s because they get it, they see my vision and they understand that there’s a void in releases like that especially when there are so many common songs being edited because it’s the easy sell. It’s like what happened to digging? What happened to shocking people with what you’ve come up with? It used to be about bringing something new and adding on, now it’s mostly been about taking whatever classic 90s rap song and putting your own beat over it. Nas, Wu-Tang etc would’ve never rhymed over those beats and it never would’ve been a B-side on a 12” opposite of a DJ Premier or Pete Rock A-side. Those records are already hits, try finding a new rapper and making a hit with them or take an album cut and flipping that but leave the popular single alone. But I get it, it’s an easy sell when it’s something nostalgic and the 45 thing is batshit crazy.

Skeme – Totally, because that’s what it’s always been about. Sample something unknown, flip a new sample that will make other diggers want to find the original. I’m carrying on tradition of what diggers have always done, find something unknown and flip it or throw it on a sample tape. Soulman said when he was doing his tapes, he was playing stuff to ride around in the car in with his homies and I still take that approach except I want homies across the globe to be like what the fuck is that, I need to find that.

With the new 45 (and the previous ones) it was about digging for the obscure and dope joints. Records that I had dug for while traveling across the globe. There’s so much music out there that’s untouched so I want to challenge myself and introduce it to diggers, collectors and good music lovers.

Mossimo Chao – So are your tapes a reflection of that philosophy of digging as well?

Skeme – Oh most definitely but it’s not always about the old with the tapes. The Shifting Gears series is mainly about the old / rare but there’s some newer cuts on there as well. Tapes like New Library Sounds and New Psych Sounds is about new releases that most probably aren’t hipped to.

Mossimo Chao – So what’s up with the next installment in Shifting Gears?

Skeme – Volume 3 has been done for a while now. I was waiting for the right time to drop it in between other releases so I was looking at an end of the year date because I had another tape or two I wanted to drop first but now things are so backed up at the manufacturer because they’re out of supplies due to the pandemic. I’m still hopeful that I can still drop it during that time though. And actually volume 4 is done as well which should be a 2022 release but before those, I have my next tape, The Mack of The Year. It’s a special one which celebrates a monumental moment in my life. Hopefully early October it will be ready for a release.

Mossimo Chao – So what else have you been up to since our last conversation?

Skeme – Let’s see, I did some writing again for Disco Patrick’s Hot Stuff magazine, I was interviewed in Holy Mountain Printing’s WDW3 Magazine which I’m having fun with because I get to geek out and talk about toys, comics, manga and more. I dropped the new No Requests vol. 2 tape with Funk Night Records which is another label I love to work with, they get it and understand. Plus side projects for labels and people that have hired me to do music related things for them. It’s been fun but I’m itching to be in the club again but it’ll happen when it’s right. The world isn’t fully open yet so I can’t really start properly planning tours until that time anyway.

Mossimo Chao – We recently lost another legend with the passing of Biz Markie, how has that affected you?

Skeme – There’s been a lot of people that have passed but I don’t think any have really hit me the way it did with Biz and I’m not even talking about the Hip Hop perspective. I’m talking about from a fellow collector side of things and a person who possessed so much knowledge that is now lost. Biz was a super collector of a lot of things from toys to tapes, VHS footage and more. Dude knew so much so now all that information will be buried with him. There were a few times that he, DJ Cash Money (another collector) and myself would be on the phone comparing notes and trying to one up each other and Biz always seemed to pull a rabbit out of his hat. I really wanted to interview Biz and document the stories that he had because I knew a time would come where that information would be lost. It just really sucks that it happened so soon. I’m trying to preserve this shit especially from people like Supreme La Rock who has crazy stories and history as well.

Mossimo Chao – So what’s next?

Skeme – At this point, whatever life throws at me. I’ve got a few upcoming gigs to play, I’m still doing mixes for my streaming app on Nerve and just trying to do more projects. Other than that, staying healthy and enjoying life as much as possible.