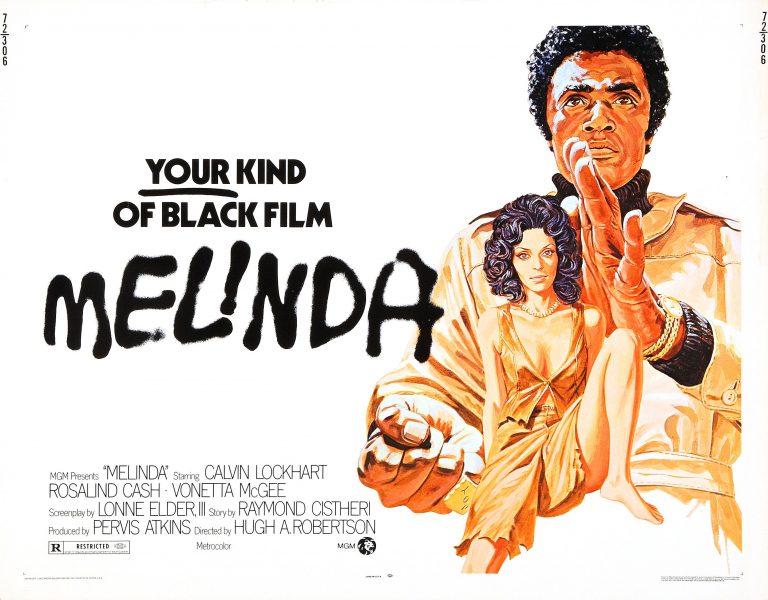 One of the better and most successful Blaxploitation films, Melinda finally see’s a legit release on home video after all of these years and many bootleg VHS and DVD’s that have flooded the market. The Warner Archive collection has been busy bringing many of the harder to find classics of various genres to DVD in a special Made To Order service including the Bernie Casey / Pam Grier gem, Hit Man.

Melinda features Blaxploitation superstars Calvin Lockhart, Rosalind Cash, Vonetta McGee and Jim Kelly take on the mob in this super-charged, action-packed thriller. When Melinda Lewis (McGee) is found brutally murdered in his L.A. apartment, smooth-talking disk jockey Frankie J. Parker (Lockhart) turns sleuth to clear his name. Chased and attacked by junkies, dealers and thugs, Frankie soon learns Melinda is the ex-mistress of a Chicago mobster and has evidence the gangster wants back. Enlisting the aid of a jealous ex-flame (Cash) and a karate master from the hood (Kelly, in his screen debut), Frankie sets out to track down the mob boss who framed him and avenge Melinda’s death. A box-office success on its original release, Melinda was one of the few Blaxploitation films produced, written and directed by African-Americans and boasts a fantastic funk score by R&B legend Jerry Butler and Grammy® winner Jerry Peters.