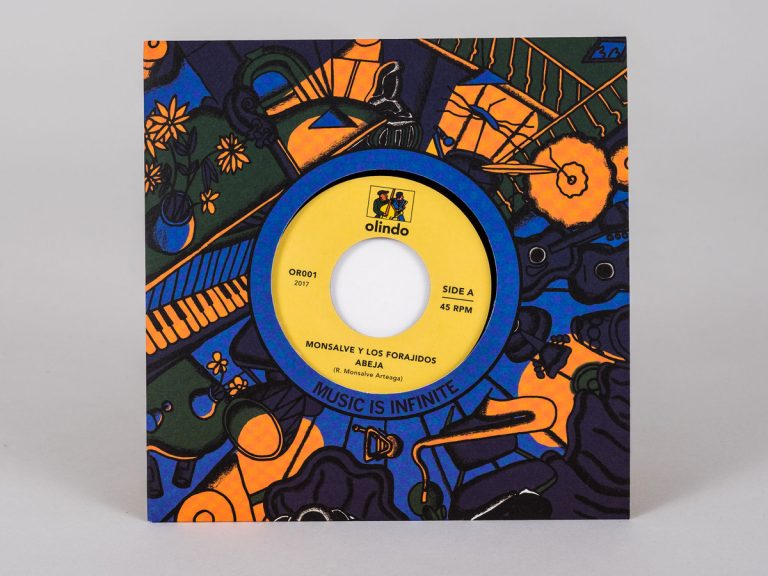 Nothing says Summer like afro-latin funky grooves and Olindo Records hailing from London, UK delivers their first release from the label that was started by the music obsessed team behind Colectivo Futuro.

“Their first release comes from the Paris-based septet Monsalve Y Los Forajidos, led by Venezuelan bassist Raul Monsalve, the band is an amalgamation of sounds and influences that revolve around traditional afro-latin styles of music with a heavy dose of psychedelia, latin jazz, and funk. Both tracks originally appeared on the band’s self-released Volumen Dos album, but are presented here on vinyl for the first time, re-mastered and cut at The Carvery in London.

On the A Side, Abeja is built upon a mixture of the NY-style Mozambique rhythm, which had a crucial impact on Salsa made in Caracas; and straight up James Brown inspired funk. All rooted by the quintessential latin Clave rhythm to keep dancers locked in. The tune’s vocal chant “Va Volando Como E” serving as an uplifting mantra for Los Forajidos.

Black & Decker on the B Side was written by the band’s co-founder and former guitarist, Gustavo Guerrero. Originally intended for a short film about cooking, it is based on an atypical cha-cha rhythm on 15/4 time, with the Marc Ribot inspired guitar once again playing a key role in providing the band’s signature psychedelic touches.”